Bengals At Eagles: A Second Quarter To Forget

The Cincinnati Bengals won the game by three touchdowns, but not before putting together one of their worst quarters of the season.

Share All sharing options for: Bengals At Eagles: A Second Quarter To Forget

To be perfectly honest, there isn't a quarter that I can remember that was as dreadful than the second on Thursday night. Turnovers, penalties, broken coverages, this period was a Who's Who, or What's What, on how a team faces potential elimination with boneheaded mistakes. Thankfully against the Philadelphia Eagles, those mistakes were eventually overcome, placed in the rearview mirror -- though against a better team, especially a playoff team, it would have been a massive undertaking.

BENGALS OPEN WITH THREE AND OUT

BenJarvus Green-Ellis picked up four yards on first and ten, reaching the Bengals 41-yard line with over 14 minutes remaining in the second. Dalton finds Jermaine Gresham on single-coverage on second down with Nate Allen covering the tight end's out towards the right sidelines. That's the matchup. It's perfect. Size wins and Gresham has enough attitude to shed an attempted tackle. Yet Dalton throws the football too high for Gresham , setting up third and six with 13:34 remaining in the half. Poised in the pocket, Dalton targets Marvin Jones' curl at the first down marker, but the not-so-sure-handed receiver failed to recover on a pass that was football slightly behind him. Catchable. And a potential first down turns into a Kevin Huber 23-yard punt.

Now the Eagles have the football at their own 43-yard line with 12:43 remaining in the second after a Nick Foles cadence forced Manny Lawson offsides. Which happened a lot Thursday night -- many of which were declined because the Eagles picked up the first down anyway. Brilliantly Foles and Damaris Johnson fake the bubble screen while Jeremy Maclin, in the slot, bends toward the sideline and stretches vertically.

When Johnson showed the screen, Crocker instinctually stepped up which unfortunately and immediately forced the safety out of position during Maclin's vertical. 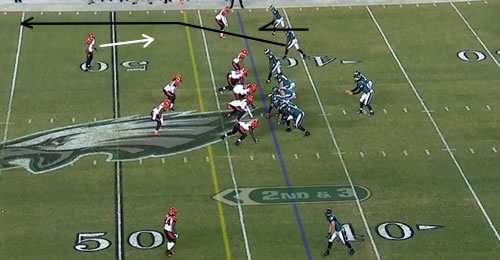 Fortunately the pass was underthrown, causing Maclin to slow and redirect after making the reception. Yet the 46-yard reception eventually led to an 11-yard touchdown reception by Riley Cooper, reducing Cincinnati's 10-point lead to three.

During Cincinnati's ensuing possession, three of four things go wrong. Green-Ellis is crushed for a one-yard loss (Andre Smith was asked to cutoff the inside defender during an inside run, which is extremely difficult), Brian Leonard picks up seven during a shovel and Marvin Jones is called for a false start, setting up a third and nine at Cincinnati's 36-yard line.

Dalton takes the shotgun snap when Brandon Graham speed-rushes around a flat-footed Andre Smith, knocking the football out of the quarterback's grip. Trent Cole recovers.

With the Eagles recovering the football at Cincinnati's 29-yard line, the Bengals defense nearly collapsed. They definitely lost their composure, albeit momentarily.

Bryce Brown's 11-yard screen, during the Eagles ensuing play, put Philadelphia in the red zone. On second and 12 with 8:51 remaining in the second on the Bengals 20-yard line, Vontaze Burfict is called for a defensive hold and Adam Jones adds a personal foul on the next play, putting the Eagles into a first and goal at the three-yard line.

Yet the Eagles never scored a touchdown, despite being three yards out. Foles and Brown failed to hook up on a shovel pass and Burfict deflected a second down pass to Harbor -- beautifully. On third down, Maualuga hit Harbor coming out of his stance, causing the tight end to lose his bearings during Foles' attempted touchdown pass. Philadelphia ties the game at ten, but the defense at this point began picking up their own momentum to carry the Bengals through the third quarter.

During Cincinnati's ensuing possession midway through the second quarter, Jermaine Gresham is called for an offensive hold, forcing the Bengals into a first and 20. Green picked up 13 yards with a square-in route, setting up a second and seven on Cincinnati's 23-yard line. Dalton badly threw behind Green on second and Trent Cole ended the possession with a quarterback sack, looping around the defensive tackle, taking advantage of an open gap made available after Clint Boling had fallen to a knee, failing to recognize a basic stunt.

As the second quarter reached the four minute mark, the Bengals offense picked up two first downs, reaching Cincinnati's 32-yard line with 2:08 remaining in the half. Now we can disregard what had happened, salvaging a horrifying second quarter.

Yet Andre Smith commits and offensive hold and Cullen Jenkins looped around from the left DT spot, behind Brandon Graham and Trent Cole, forcing Dalton to lose the football on the hit -- no one picked him up. The Eagles recovered and eventually scored a game-leading field goal, taking a 13-10 half time lead.