When I think about “chess pieces” in today’s NFL and how the Bengals create mismatches, the first name I think of is Andrew Hawkins because he gets so many plays designed for him out of different formations. Recently, I've found Jay Gruden using another movable piece to his advantage. You may not have noticed because he’s not tearing up fantasy football, but fourth round rookie Orson Charles has become a versatile prospect whose role keeps expanding.

Charles is a former receiver and was considered a "Move-TE" by draft analysts. Early on, the Bengals used him in various spots, but mostly as an Inline-TE. When starting fullback Chris Pressley tore his knee in the opening quarter of Thursday's game, Charles saw his role expand into more of an H-Back type player. Over the course of the game, the rookie out of Georgia lined up on the line, off the line, in the slot, in the backfield and split out wide. Take a look at a few (click on picture to expand): 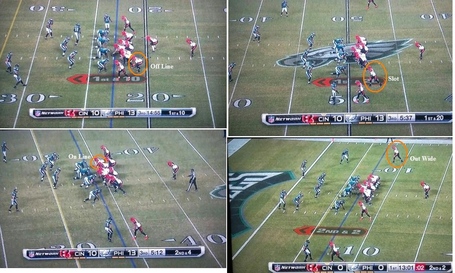 What really got me excited were the plays where Charles made an impact out of the backfield. I'm not big on the traditional fullback. That role is diminishing and a guy with Charles' skills offer more to a passing offense. Both of the plays we focus on below are in the running game. With Charles' skill-set, it's wise to get him in space and preferably blocking a safety or corner. He's very effective on both plays here: 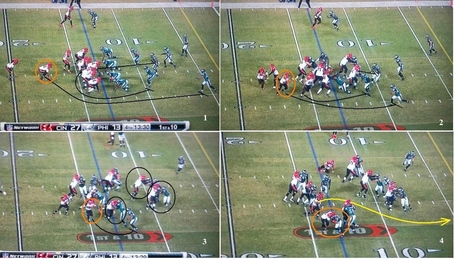 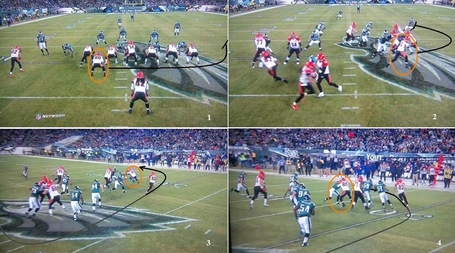 National media has been all over Vontaze Burfict, and Bengals fans have fallen in love with Trevor Robinson at center, but there's another linebacker that has made a mark in sub-packages and on special team; Kansas State's Emmanuel Lamur.

You could see it from his first NFL snaps, Lamur belongs. He's long, lean and athletic. He looks like your typical weakside linebacker. His role has increased already with Mike Zimmer working him into coverage situations and all three linebacker spots when needed. With Rey Maualuga and Vontaze Burfict as the nickel linebackers, the speedy Lamur stands out whenever he gets in.

I'm ready to call it now; Emmanuel Lamur will play a big role on this team in 2013. At the very least, I think he has a future starting role as one of the nickel Linebackers. With the physical tools to cover, Lamur just needs the reps and experience. In the play below, I've illustrated a play in which Lamur showed his youth. 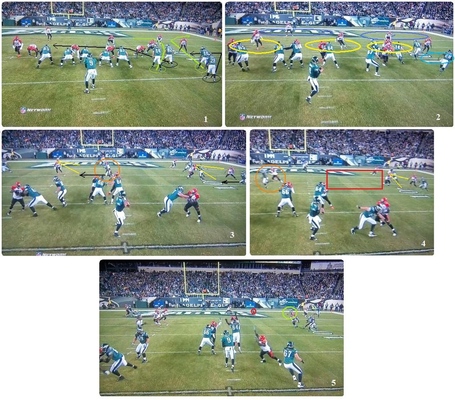 1) The Eagles come out with four WRs and one RB. It's an empty backfield with RB Dion Lewis split out right. With Philadelphia's receivers bunched on the right side, the Bengals have only three defenders to cover four Eagles; a sign of Zone coverage. The ‘Green Routes' are the one's Nick Foles will have to read and progress through.

2) In the 2nd picture, I've illustrated what looks to be the Bengals' zone responsibilities. Nelson and Newman have the deep halves; all three Linebackers have an intermediate zone. When Dion Lewis (28) runs his route towards the sideline, which holds Chris Cocker short.

3) Here, you'll see No. 82 running a drag route with Emmanuel Lamur trailing. You'll also see Crocker passing off Lewis to Maualuga, and Maualuga releasing Riley Cooper into the deeper portion of the field. Nick Foles really can go to Jeremy Maclin on the flag route because Crocker was forced to stay short, but when he notices Lamur is in man coverage and not passing Johnson off to Burfict, the passing window was huge (Picture 4).

Had Lamur stayed in his zone, the throw would've been much harder for Foles, and as a rookie, he may have decided to make the harder throw to Maclin on the ‘Flag' route. It's a rookie mistake that didn't end up costing the Bengals in the end.