Cincinnati Bengals at San Diego Chargers: All You Need To Know

A collections of stories, previews and information heading into Sunday's game between the Cincinnati Bengals and the San Diego Chargers.

Share All sharing options for: Cincinnati Bengals at San Diego Chargers: All You Need To Know

Stories, previews, reports and updates regarding Sunday's game between the Cincinnati Bengals and San Diego Chargers.

Following a four-game losing streak earlier this season, dropping Cincinnati's overall record to 3-5, the Bengals have won three straight against the Giants, Chiefs and Raiders. They are looking to record their fourth straight and seventh of the season, continuing to tailgate the postseason picture. The Steelers without Ben Roethlisberger play the Ravens in Baltimore. A Bengals win and Steelers loss gives Cincinnati a spot in the early playoff picture with four games to go.

There's multiple reasons that people are giving for Cincinnati's sudden production in the rushing game. Players are more familiar with each other, effective passing offense, mediocre rushing defenses, more Cedric Peerman playing time, Trevor Robinson starting at center. In the past two games the Bengals have generated over 400 yards on the ground, led by BenJarvus Green-Ellis with his only 100-yard performances in back-to-back games.

The Cincinnati Bengals are 9-30 all-time when playing games in California, 2-5 during the Marvin Lewis era with their last win against the Chargers in San Diego being 2003. We included Denver and Arizona on the whole west coast argument this week, which further promotes that Cincinnati is not very good team when having to travel long distances for a game out west.

STORY OF RECOVERY AND INJURY

For the first time this season, every Cincinnati Bengals player on the roster practiced during Thursday's session. Apparently that was a big no-no to the football gods when Mohamed Sanu suffered a stress fracture in his foot during that practice, likely going on season-ending Injured Reserve after Sunday's game against the Chargers.

However Andrew Hawkins and Kyle Cook returned to practice this week, giving Cincinnati a compliment of wide receivers and a realistic timeline for Cook's return. Hawkins is probable, along with Marvin Jones who returned last week, while Cook remains inactive until the team activates him on the active roster (which requires a roster change).

At least the reoccurring theme of blackouts doesn't affect the Cincinnati Bengals, but the theme is most definitely alive. This time for the San Diego region. The state of Ohio is tapped for three different games during the late afternoon CBS schedule. The Bengals-Chargers saturate Southwest and central Ohio (as well as most of northern and central Kentucky), while the Browns-Raiders have Northeast Ohio (just like every time they play at the same time). The eastern edge of the state will have Steelers-Ravens. Small segments in California and Arizona will see the Bengals. 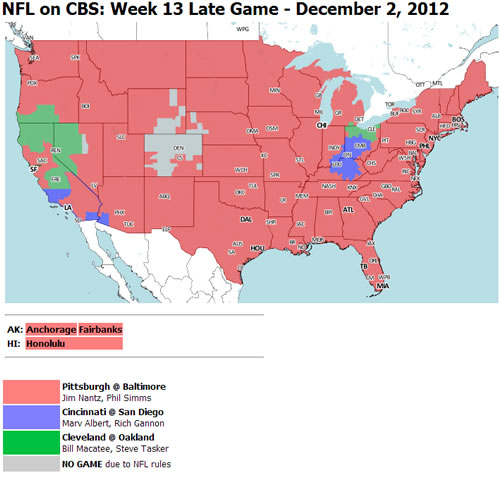