Three Bengals Plays That Won the Game in Pittsburgh

“We just didn’t make the plays when we needed to.” We’ve all heard that before; especially from the Bengals locker room in post-game interviews. The team that makes the critical plays at crucial times will usually win the close game. That’s exactly what the Bengals did and those big plays were made by their best players.

Share All sharing options for: Three Bengals Plays That Won the Game in Pittsburgh

Both offenses were off to a slow start and it looked as if another Steelers drive was about to be stopped on 3rd down. Pittsburgh comes out in 12-personnel (1-RB, 2-TE) and Mike Zimmer doesn't buy it. He saw this earlier and the Steelers still passed the ball out of a usual running personnel grouping; he sends out his nickel defense. 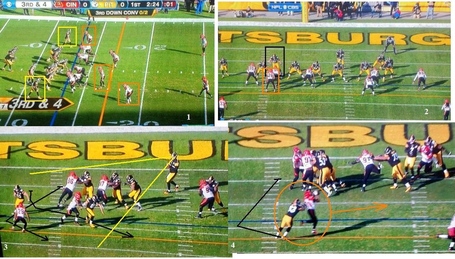 This matches Leon Hall in the slot against the Steelers tight end Heath Miller. At the snap, Miller allows the other TE to clear out the field in front of him; Burfict follows. Hall keeps inside leverage on Miller even though he's running towards the corner; Hall sees it. Ben Roethlisberger is staring down his reliable tight end as he breaks his route back towards the middle, but Leon Hall jumps the route beautifully just as the ball arrives. Not only does Cincinnati's best defensive back play the coverage perfectly, he makes a nice open-field move to score the game's first points and the Bengals lone touchdown.

Both teams missed an opportunity to win the game after each kicker couldn't hit their respective long field goal tries. Each team was trying to get back into position for another chance at ending this game in regulation. The Steelers were very aggressive with little time left on the clock. Cincinnati was playing very deep zone coverage; prevent defense, if you will. 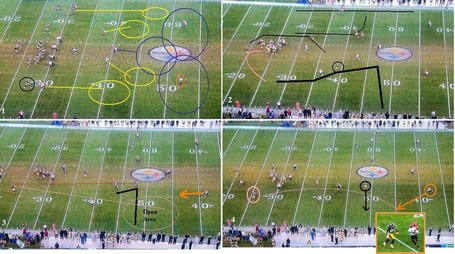 As the pass rush forces Ben to bounce outside the pocket, the Steelers receivers and Mike Wallace transfer into scramble-mode, looking for open areas to catch a pass. With Newman coming up to keep Roethlisberger from running, the open area between he and Reggie Nelson became wide open. The Bengals get lucky when Wallace flattens his route towards the sideline and Roethlisberger throws towards the most open area. By this time, Nelson is already running full speed and makes the interception to give the Bengals one more chance.

This was the first play after the Reggie Nelson interception. The Bengals come out with three receivers bunched to the right of Dalton. This will help keep A.J. Green get a free release, and the ball is going his way. 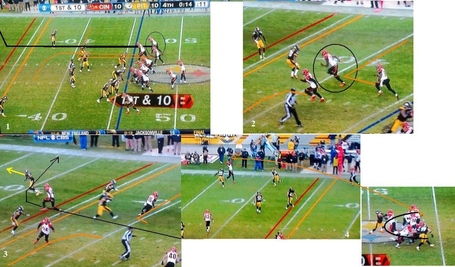 The play leaves Green one-on-one with Keenan Lewis and the Bengals stud receiver opens Lewis' hips and heads towards the sideline. The Bengals offensive line has a great pocket for Dalton to throw and Cincinnati's 2nd year quarterback delivers a strike. This wasn't an easy throw. These are the exact throws that he needs to make in clutch situations. Green, Dalton and the offensive line played their best when their best was needed and it sent the Bengals to the Playoffs.