Geno Atkins And A Performance That Helped Clinch A Postseason Berth

How the Bengals and Geno Atkins beat the Steelers and embarrassed David DeCastro along the way.

Share All sharing options for: Geno Atkins And A Performance That Helped Clinch A Postseason Berth

Geno Atkins has been the Bengals best player all season. He seems to always bring his best and Sunday was no different. When Cincinnati needed their star players to rise and take over the game, Atkins did so by posting 6-tackles, 2.5-sacks and a forced fumble.

That brings his season total to 13.0 sacks, which ties a Bengals franchise record set by Eddie Edwards in 1983 (Coy Bacon has the unofficial record at 22, but quarterback sacks weren't an official statistic yet). The extra pride we should be feeling today comes at the expense of Steelers first round pick David DeCastro, a draft favorite of many here. That all changed when the Bengals basically chose Kevin Zeitler over him in the draft. The way Atkins took DeCastro to school, should argue for some measure of trust with this front office, at least for a while. Here’s how Atkins dominated when they needed him most.

Pittsburgh comes out in their 22-personnel (2-RBs, 2-TEs), and the Bengals strangely counteract with their nickel package. Basically, Mike Zimmer isn't buying this heavy run formation by the Steelers with seven-yards to go on 3rd down. 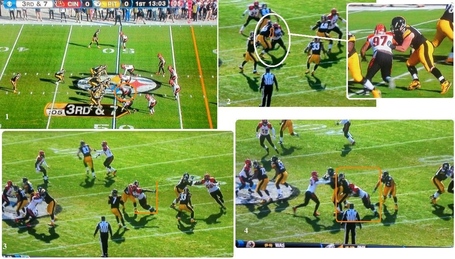 Lined up at LDT, Geno Atkins shoots towards DeCastro's (#66) outside shoulder and swats away the rookie's left hand and then rips upward with his right arm to finish the move of blowing by the Steelers guard. Atkins then must bend the arc without losing much speed. With the help of Michael Johnson pushing Pittsburgh's LT into Ben's face, Atkins blindsides the QB for his first sack of the game. This play ended the Steelers first drive of the game.

It's third down on the Bengals 29-yard line, Pittsburgh has been driving and looked like they'd at least tie the game at 10. The Steelers show pass right out of the huddle and the Bengals defensive line knows they can go all out on the pass rush. 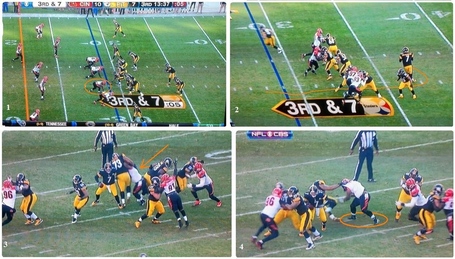 Atkins lines up at RDT over veteran Roman Foster (#73). Atkins explodes off the snap low and to the outside; he's already beaten Foster with his leverage. Atkins then raises, powers through Foster's chest/armpit, and throws the 335 lbs. lineman onto his back. Atkins gathers himself and collects his second third-down sack of the game; taking the Steelers out of field goal position and preserving the Bengals lead.

Notice a trend here? Third down is Atkins' down. He also seems to be better when the clock strikes 13... strange. Anyway, Atkins is lined over David DeCastro again at LDT. Geno gives the rookie the same exact rip-move from the first quarter and again, he beats him cleanly. This time, Wallace Gilberry is coming from the RDE spot and hits "Big Ben" low while Atkins hits high; causing a fumble and ending another drive. 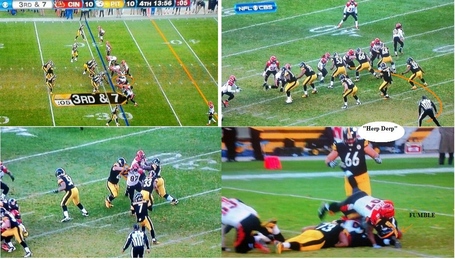