Andrew Whitworth On The Pro Bowl Process: It's A Joke

Bengals offensive tackle Andrew Whitworth hates how the Pro Bowl team is developed. This isn't the only year he's said so.

Share All sharing options for: Andrew Whitworth On The Pro Bowl Process: It's A Joke

There's a certain presence that Bengals offensive tackle Andrew Whitworth has. He speaks, people listen. When he broods, people stand aside. When he watches his young quarterback taking unwarranted assaults, he makes Batman grimace and Chuck Norris proud. Despite being listed as one of the league's top pass blockers by Pro Football Focus for another season, Whitworth wasn't named to the 2013 Pro Bowl starting lineup.

We love Whitworth, the team's older brother to many players. Seriously. If you had a brother like Andrew Whitworth, wouldn't you take advantage of the intimidation factor? "Oh, so that is your older brother," as the bully gladly hands over his lunch money and feels honored in doing so. Yet Whitworth isn't having a Whitworth-type season. Cincinnati tends to run more to the right of center behind Andre Smith and Kevin Zeitler with much greater success and Whitworth has allowed more quarterback sacks this season than 2010 and 2011 combined.

For the past four years, the 2006 second-round pick out of LSU has been the third-wheel, bridesmaid to the NFL's All-Star game, which has theoretically become more about recognition than any game being played. During that time, we've been advocates for Whitworth in the Pro Bowl; not only because he's a Bengals offensive lineman, but also because few players produce like he does, often facing some of the league's toughest competition. 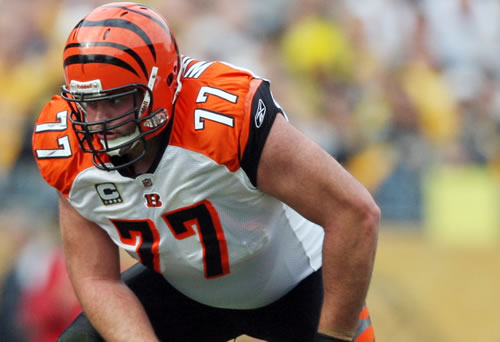 On the other hand, this year's offensive tackles on the AFC squad, Duane Brown, Joe Thomas and Ryan Clady, have combined to allow as many sacks as Whitworth this season. Don't think of it as a knock on Whitworth; more like an obvious impression those tackles have applied on the voters in the NFL. Brown is a superior run-blocker, Thomas was graded as highly as Whitworth as a pass-blocker and Duane Brown ranked sixth overall.

Was Whitworth snubbed? Sure. No. Maybe the odd man out among the highly qualified. Perhaps name recognition factored more. Yet, we ask, does it matter?

"It’s a joke to me," he said Wednesday before the results were announced. "I don’t worry about that stuff every year. I plan to try and make the playoffs and do what I do and that's it. That's all you can do. It doesn't matter one way or the other to me. I know people probably think that’s crazy, but it really doesn't."

Does anyone actually believe that? Players want to be recognized, as does anyone else. Yes Whitworth is as honest as they come and in the big-picture, we're sure he's more focused on the playoffs rather than a meaningless Pro Bowl -- one of the reasons we celebrate him as much as we do. Yet for someone that deflects a shrug by way of defiance, it's clear that Whitworth wants some measure of fairness that determines the All Stars.

It's not just this year.

"Most of the (Web) sites and other stuff I’ve seen have Joe and I as the most efficient tackles in the league," Whitworth said. "I think what happens is all those other guys are top five (draft) picks. That’s hard to fight. But I know what kind of year I’ve had so it doesn’t matter."

There it is again. It doesn't matter.

When graded as the league's top offensive tackle in 2010, he was snubbed once again. Whitworth shrugged it off saying:

"You figure the high draft picks and more visible teams are going to have an edge and D'Brickashaw is on a team that is doing well," Whitworth said. "And once someone goes, it seems like they're there every year because of the name recognition. It is what it is. It would have been a nice honor. But the real honor is going to be when I help the Cincinnati Bengals to a championship."

Willie Anderson, Cincinnati's first-round pick during the 1996 NFL draft, was arguably the Bengals top offensive player, even among names like Carl Pickens and Corey Dillon playing on the same squads. It wasn't until his eighth season in 2003 that Anderson was recognized as one of the top offensive tackles in the game. A year after that, Anderson strung together three consecutive seasons in which he was named on the First-Team All-Pro Team. He was recognized once, which initialized an outpouring of awards until his eventual decline in 2007.

So if anyone can relate to Whitworth, it's Anderson, saying in 2010:

"I empathize with him and I know how well he's played," Anderson said. "Three things go into making the Pro Bowl. Being good, but also being on a good team and name recognition and I think Whit's the victim of being on a team with a bad record. Everybody who has watched the Bengals play knows what a good year he's had, but no one wants to look at you if you’re on a bad team. Only three make it, but if you don't make it, it doesn't mean you're not an elite tackle."

Whitworth's window is tightening, as he will enter his eighth season in the NFL next year. We suspect the leg he injured last year isn't 100 percent, lacking the raw power he had when he was younger, resigned to pass-protection technique even during inside runs. Some would argue he's declining while others would suggest that he's merely adjusting, containing the backside lanes for running backs to cutback into.

Snubbed or not, Whitworth keeps the perspective of a veteran leading Cincinnati's next generation of superstars, focusing on the only thing that matters. Playoffs.