I was privileged enough to attend the Bengals/Chargers in person and wanted to share my observations and overall experience in San Diego.

Share All sharing options for: Monday Wrap-Up: The Day At Qualcomm Stadium

When you live in Southern California as I do, the opportunities to see the Cincinnati Bengals in-person are few and far between. Two trips to Cincinnati and PBS aside, anytime I want to see the Bengals live I have to pray for a game in Oakland, San Francisco, Arizona or San Diego. So, when the team's schedule came out earlier this year, I jumped all over the opportunity to attend the game. The tickets I purchased were in the first row of the field level, on the 30-yard line of the Bengals sideline. Needless to say, I was pretty revved up about the opportunity to watch this promising team with such great seats. I wanted to post about my experience and on-field observations

You probably already know how much I enjoyed myself at the pregame tailgate, but the Chargers fans weren't their usual jovial, aggressive selves. Their then 4-7 record wasn't helping their moods, but the lack of their presence early on during the tailgate hours was notable. In fact, in the video that I was interviewed by The San Diego Union-Tribune, you'll notice the scarce amount of cars in the parking lot of Qualcomm Stadium. I'm not sure if this is the norm around the league when their team is struggling, but the atmosphere definitely had a different feel to it than in years past.

In what started as a gloomy and dreary-looking day, it turned into a beautiful one by the time the teams kicked off. As you can see in this picture, the clouds parted and made for a great afternoon. In case you're unable to see what's going on in this shot, that's Andy Dalton talking to his offensive line after a few poor offensive possessions. 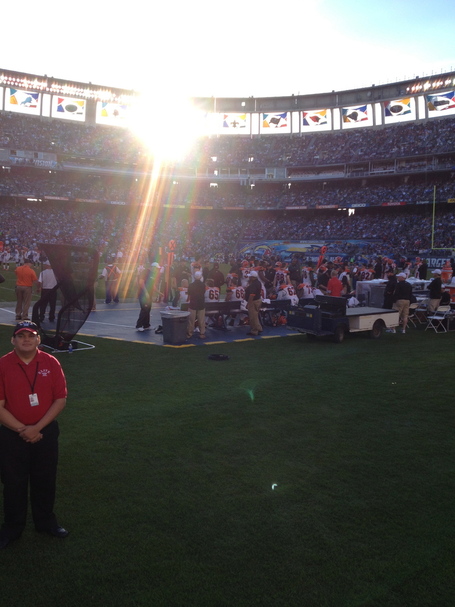 As for the game itself, many Bengals fans here at Cincy Jungle have labeled it as "ugly". I wouldn't disagree with that, as the once "clicking on all cylinders" Bengals offense didn't have the same swagger that it had over the past three games. You can blame that on a long road trip, or on two key injuries to Mohamed Sanu and Cedric Peerman--either excuse could suffice. You could also point to facing a better defensive unit in the Chargers' group than they have in the past two or three weeks.

Some other observations regarding the Bengals, namely surrounding the offense. A.J. Green's big-play impact was limited against San Diego, posting nine receptions for a respectable 85 yards and it was obvious that the Chargers keyed on him, especially with Sanu out of the lineup. Also, I was front and center to witness Dalton's leadership ability. As evidenced in the picture above, Dalton was constantly upbeat, walking around and rallying the troops. It was one of his worst statistical game, but quite possibly his most gutsy performance. Lastly, I found myself interested in how often the special teams guys were up and practicing snaps, kicks, etc. It didn't really matter the down or distance--when the Bengals had the ball, they were up, moving around and doing some drills.

Two specific Bengals players that had great performances? Offensive guard Kevin Zeitler was doing some great work from what I saw--particularly in the running game. On defense, you have to tip the cap to Carlos Dunlap who had two sacks, two forced fumbles and a fumble recovery. He was everywhere yesterday.

For the Chargers, Philip Rivers (all impersonations aside), does not look like the same quarterback that he was as a perennial Pro Bowler in the late-2000s. He's extremely skittish and doesn't appear to trust anyone on his offense. Antonio Gates didn't have much of an impact and the only play that was somewhat reliable for the Chargers was screen and dump-off passes. Those plays are good in theory, given the patchwork offensive line that San Diego trotted out on the field and the aggressiveness of the Bengals defensive front, but the act got old and it wasn't garnering many big plays.

Additionally, the Chargers don't appear to have much faith in Ryan Mathews. San Diego gave up quite a bit to move up and grab him a few years back and he has greatly disappointed. He looked tentative, posting 26 yards on nine carries, and the coaching staff doesn't appear to trust him in the red zone because of his fumble issues. In truth, this team has often been a media favorite to go far in recent years, but attrition through injuries and free agency have rendered this San Diego team a really below-average one.

The best part of the day (aside from spending it with family and friends, of course)? After likely seeing my goofy tiger hat/scarf/mitt thing, as well as his jersey on my brother and I, Bengals running back Brian Leonard came over to us and gave us his gloves that he used in the game. 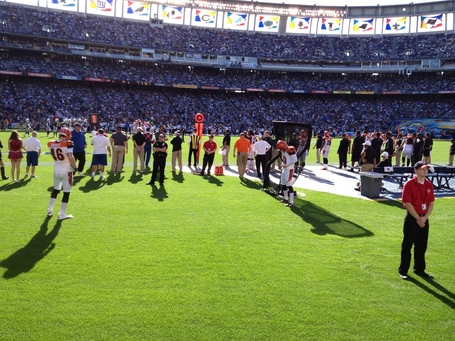 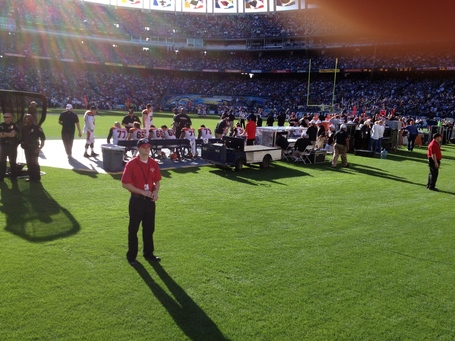 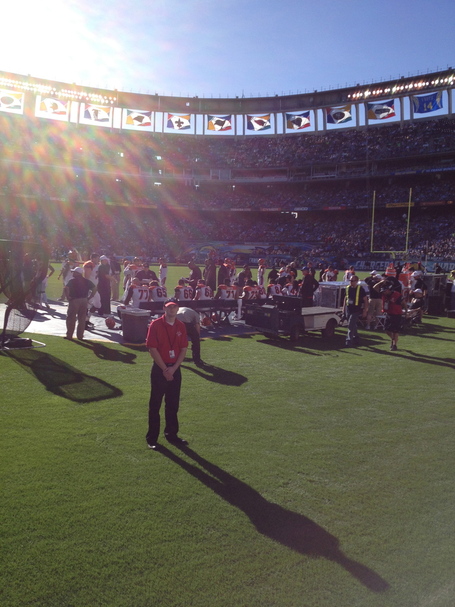