Baltimore Ravens at Cincinnati Bengals: All You Need To Know

A collections of stories, previews and information heading into Sunday's game between the Cincinnati Bengals and the Baltimore Ravens.

Share All sharing options for: Baltimore Ravens at Cincinnati Bengals: All You Need To Know

Stories, preview, report and updates regarding Sunday's game between the Baltimore Ravens and Cincinnati Bengals.

STARTERS TO START (THEY SAY)

Andy Dalton says they're preparing and approaching their Week 17 game against the Baltimore Ravens like any other game, despite Cincinnati being unable to improve their position; clinching a postseason spot and clinching the No. 6 seed, they can't lose position either. Earlier this week Marvin Lewis said the same thing.

We're sure that the starters will start, but the question is for how long. Every year the Bengals had clinched a postseason berth prior to their regular season finale, starters were eventually pulled from the game, losing those respective games badly.

It wouldn't be surprising if the Bengals did the same thing this year, approaching this game like a third preseason game, hoping to generate some momentum offensively entering the postseason, but resting starters for maybe the second half.

One of the primary storylines on Sunday isn't so much the Bengals playing, which is a rarity, we know. However the Bengals have an opportunity to play any of the conference's division winners, none of whom are locked into a seed. Cincinnati will play the No. 3 seed and we're waiting to see who that'll be. From a posting earlier this week.

There's a chance that 2009 could repeat itself, in that the Bengals would play the same week 17 opponent the following week during the Wild Card round. If Baltimore beats the Bengals and Miami beats the New England Patriots, the Ravens and Patriots finish at 11-5 with the Ravens, who beat the Patriots earlier this season, securing the No. 3 seed.

A rematch from the 2011 Wild Card round, the Bengals could return to Houston if the Broncos beat the Chiefs, the Patriots beat the Dolphins and the Texans lose to the Indianapolis Colts. Of the scenarios we examined, this seems like the most likely and even the most beneficial to Cincinnati, considering how poorly the Texans are playing right now.

Another rematch from earlier during the season, the Denver Broncos could host the Bengals if Denver loses to the Chiefs and the New England Patriots beat the Miami Dolphins. This scenario presents a three-way tie between the Broncos, Patriots and Texans. The Patriots and Broncos knock the Texans out of the first-round bye due to tiebreakers.

If the Broncos and Texans win, it won't matter what the Patriots do because of New England's one-game disadvantage against both teams. However if they lose and the Ravens win, the Patriots can fall to the No. 4 seed. 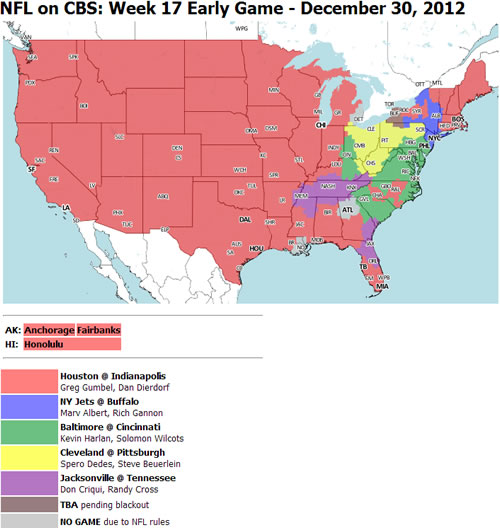 The Cincinnati Bengals host the Baltimore Ravens, therefore receive the beneficial homefield advantage from odds makers. Cincinnati is anywhere from a 2.5 to three point favorite heading into the regular season finale at Paul Brown Stadium.