The Cincinnati Bengals are putting together an impressive run rushing the football during their four-game winning streak. There are many reasons why. But one is simply familiarity with your teammates.

As a unit the Cincinnati Bengals have heavily relied and thus producing within the running game recently, greatly improving their chances not to just win games, but position themselves for a late postseason run; currently boiling down to three teams for two wild card berths. Whether it's Trevor Robinson at center, better play-calling from Jay Gruden or a general cohesion with everyone playing at the top of their game, it's working and everything is finally together.

For example, with 14:16 remaining in the first quarter, the Bengals utilized a run blocking scheme against a 3-4 base defense, with the offensive lineman angling left and taking on defenders that "cross their face". 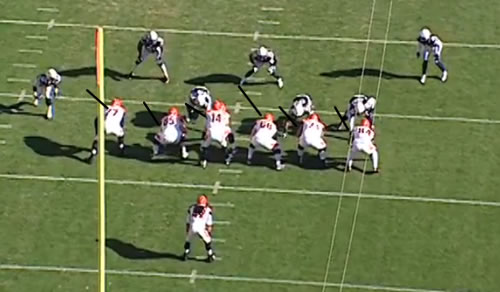 It artistically uses BenJarvus Green-Ellis' somewhat unexplosive approach to the line of scrimmage, while allowing the running back to choose his lane after a single cut.

Nose tackle Corey Luiget lined over Trevor Robinson's left shoulder. The center took his step, somewhat overreaching due to the spacing from Luiget, which drove Robinson back a step. Yet it was only momentary because Robinson recovered while Luiget began strafing down the line of scrimmage, anticipating that the Bengals center would escort him to the point of attack.

Yet because of the zone blocking scheme, Robinson's block saved the play. 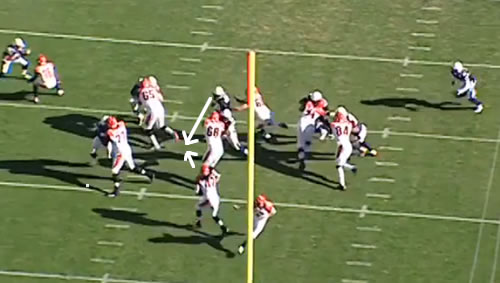 Kevin Zeitler was slow getting to the second level, where linebacker Demorrio Williams had already identified the gap. Robinson continued escorting Luiget down the line of scrimmage, while Williams was caught up in the block. Essentially Robinson wiped out two defenders. What does Green-Ellis do? He cuts to the right, directly into the massive cutback lane typically opened during zone blocking schemes. 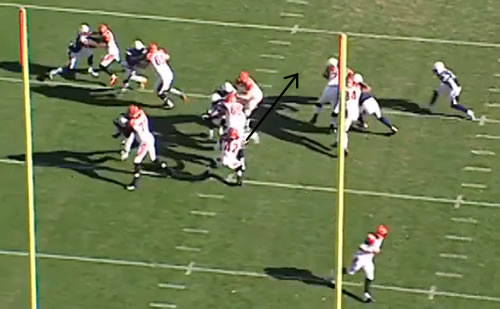 Green-Ellis picked up seven yards with the quick decision to cut upfield, taking advantage of the backside blocks.

With 13:25 remaining in the second quarter, the offensive line blocked to the right with a zone-like scheme. Everyone except for Andre Smith, who sealed defensive lineman Antonio Garay inside, allowing Zeitler time to gain leverage, then chipped off, wiping out Takeo Spikes. 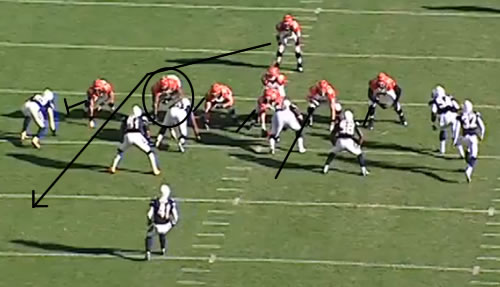 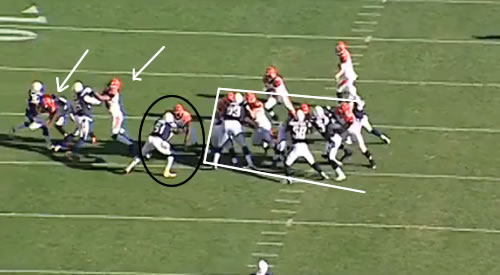 Spikes is neutralized. Check out everyone else. Zeitler and Robinson are working in concert to seal the interior defensive front inside, while Jermaine Gresham and Marvin Jones seal the outside, opening a massive lane for Green-Ellis to plow through. When it was said and done, the Bengals gained 41 yards on the play.

Finally, it's getting late and the Bengals, still down by three with 7:27 remaining in the game, are conducting their game-winning touchdown drive. It's second and three from the Chargers 27-yard. The key is Trevor Robinson and Clint Boling. 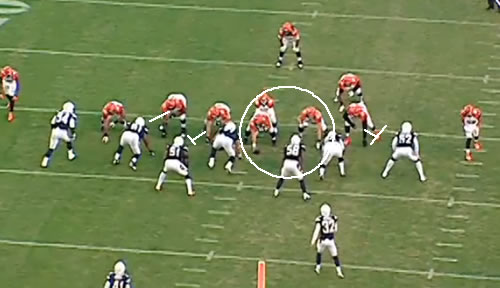 Most of the offensive line zone blocks to the right, while Robinson and Boling essentially shove Antonio Garay and Demorrio Williams down the line of scrimmage. Again. It's the ol' "you want to go that way, let's go" routine. 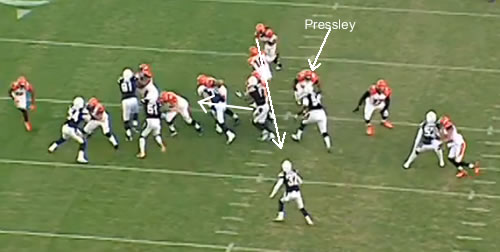 Chris Pressley targets the backside tackle Corey Liuget, wiping out his legs and opening the cutback lane, while Boling and Robinson have opened the crease over the middle. Green-Ellis flashes through the line of scrimmage, sheds off a lazy Eric Weddle attempt, gaining seven yards on the play and another first down.

Zone blocking is more art than brutality, like the favored "Power O", which blocks down with a kick out block from a pulling guard. The finesse of the zone requires timing as well as familiarity. Green-Ellis is developing that with the offensive line, as are they with their running back. If it continues, the Bengals rushing offense will have more in store when the team enters the most critical portion of the season.