Dallas Cowboys at Cincinnati Bengals: All You Need To Know

A collections of stories, previews and information heading into Sunday's game between the Cincinnati Bengals and the Dallas Cowboys.

Share All sharing options for: Dallas Cowboys at Cincinnati Bengals: All You Need To Know

Stories, preview, report and updates regarding Sunday's game between the Dallas Cowboys and Cincinnati Bengals.

The Bengals control their own postseason destiny if they win the remaining games on their schedule. Yet like last week and the week prior to that, they have to win or face a difficult task of making the playoffs, with a lot of help, if they lose any of the next four games.

The two wild card spots currently boils down to three teams with the Bengals, Indianapolis Colts and Pittsburgh Steelers, all of whom play at home this weekend. The Steelers host the San Diego Chargers and the Colts host the Tennessee Titans.

LIKELY OUT AGAINST DALLAS

The Bengals will be without Dre Kirkpatrick, who suffered a concussion against the Chargers last week, Mike Nugent and Cedric Peerman, the latter two listed as doubtful.

Center Kyle Cook suffered a high ankle sprain in the third week of the preseason against the Green Bay Packers. He was placed on Injured Reserve with a designation to return, which happened on Saturday when the team activated him on the 53-man roster. Cincinnati released Armon Binns to make room.

Trevor Robinson is expected to start his sixth consecutive game with Cook playing a backup role.

Mike Nugent suffered a calf injury while practicing onside kicks during Wednesday's practice. Because he was unlikely to be ready against the Cowboys, the Bengals signed veteran Josh Brown. To make room, the team released backup center Jeff Faine.

A significant portion of the country will have the Cowboys at Bengals on Sunday. 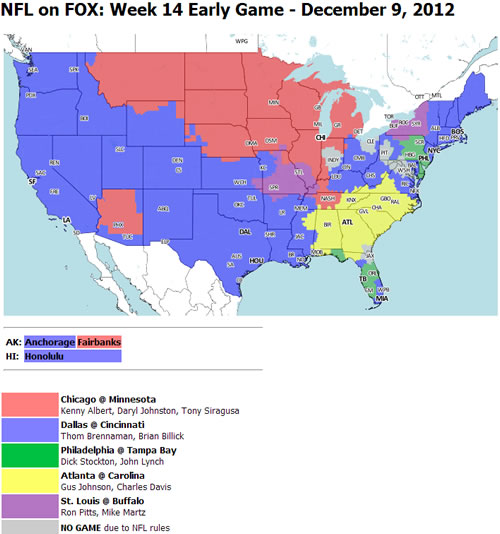