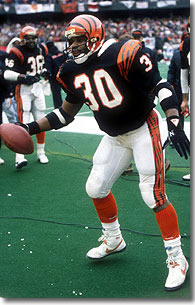 Former Bengals running back Ickey Woods recently underwent total knee replacement surgery with the support of the Gridiron Greats program "through donations and free procedures to financially struggling, retired National Football League (NFL) players." Woods captured the imagination of so many Bengals fans. He rushed for over 1,000 yards during his rookie season, generated buzz with his Ickey Shuffle and become part of a running back by committee philosophy with James Brooks. Combined, Woods and Brooks rushed for 1,997 yards in 1988, averaging 5.2 yards per rush and 23 rushing touchdowns.

Individually Woods lead the league with a 5.3 yard/rush average while ranking second with an astonishing 15 rushing touchdowns. If the Bengals were near the goalline, Woods' number was certainly going to be called.

Unfortunately Woods was ripped off when the Associate Press awarded the NFL Offensive Rookie of the Year award to New England Patriots running back John Stephens. This despite the fact that Cincinnati finished 12-4 with a Super Bowl berth while New England failed to make the postseason with a 9-7 record.

Woods' promising career was over before it truly blossomed. During his sophomore season with the Bengals, he tore an ACL in his left knee during the second game of the regular season and spent 13 months rehabilitating his knee. In response to the seriousness of Woods' injury and Brooks' ovreall decline, the Bengals decided to draft Harold Green in the second round of the 1990 NFL Draft.

After a tremendous rookie season that should have earned him rookie of the year, Woods would go on to only play 21 games in the following three seasons before he left the game of football at 26 years old. Woods is currently the coach of the Cincinnati Sizzle, a women's professional football team that makes its home at La Salle High School.