By The Numbers: How Does BenJarvus Green-Ellis Stack Up Against Michael Bush, Cedric Benson

Share All sharing options for: By The Numbers: How Does BenJarvus Green-Ellis Stack Up Against Michael Bush, Cedric Benson

The Bengals found their veteran running back in former Patriots' feature back BenJarvus Green-Ellis. The Bengals reportedly reached a three-year deal on Wednesday with the running back they call The Law Firm. Nobody twisted the team's arm to sign BGE, they decided to do it and they did have options. They could have re-signed Cedric Benson, who is coming off three straight 1,000-yard seasons, or they could have made a big offer to Michael Bush, who was the fan favorite to sign with the Bengals (he signed a four-year deal in Chicago with the Bears).

The three running backs, while somewhat similar are also completely different and can offer different things. Here is what the three backs have done over the last four years, what they're strengths and weaknesses are and what each could have brought to the Bengals.

Green-Ellis has been in the league for four years. He was an undrafted free agent out of Ole Miss in 2008, landing with the Patriots. His work load has steadily increased from his rookie year to the last year in his contract as he's worked hard to go from a special teams contributor to the team's feature back. In his four years, he has carried the ball 510 times for 2,064 yards, a 4.0 yards per carry average.

The Patriots are a very pass-heavy team. With Tom Brady behind center, the running game has always taken a back seat. Even when the Patriots were running the ball, they did so with a committee of running backs, not just Green-Ellis. Danny Woodhead and Stevan Ridley were two backs that took carries away from The Law Firm in 2011. Since the Patriots were a pass happy team, they threw to their backs on occasion. However, most of those passes went to Woodhead, not The Law Firm.

Then we go to Pro Football Focus' grading of Green-Ellis. In 2011, he had an overall score of 14.5, with rushing score of 12.0, a receiving score of 0.5 and a 1.8 grade at pass blocking. This was the highest PFF score he has received in his four-year career.

Final Thoughts: Green-Ellis is a tough runner, especially between the tackles. He may not have the size that Bush or Benson have, but he's a smart patient runner and he protects the ball. The most impressive stat, to me, is that in 510 carries, he has never fumbled the ball once. Hey may prove to be a pass-catching back in the Bengals' West Coast system if he is given the opportunity to do so.

He'll likely be a pretty good feature back in the AFC North. He doesn't have breakaway speed, but he is a tough runner and he will pick up yards way more often than he'll lose them, especially in short-yardage situations. Put it this way, even though he wasn't necessarily a feature back, in the last two seasons he scored 24 touchdowns by himself, which is more than Benson has scored in his four years with the Bengals. Green-Ellis is also a great locker room guy.

This was a good signing for the Bengals, but they will probably need to either draft a running back to compliment him, or they will need to use Bernard Scott more than they have in the last few seasons.

Bush has also been in the league for four years. He was a fourth-round pick by the Oakland Raiders out of the University of Louisville. Also like Green-Ellis, Bush has not been the featured back in his time in the NFL. He has been used as Darren McFadden's backup, but, fortunately for him, McFadden has had injury issues. When that was the case, Bush stepped in and he did a pretty good job.

Bush's best year was obviously in 2011 when he started six of the team's games and carried a lot of the weight after McFadden injured himself. One of the aspects of Bush's game in Oakland that excited a lot of Bengals fans was his ability to contribute in the passing game. Last season, Bush racked up 418 receiving yards and another touchdown.

Bush has been a solid player in Oakland and deserves a shot at being a feature back. I'm not sure if he'll get that chance in Chicago as he'll be splitting carries with Matt Forte, who is still likely the team's No. 1 option in the backfield. In 2011, Bush had a Pro Football Focus score of 11.7 with a rushing score of 3.5, a receiving score of 5.1 and a pass blocking score of 2.0. Like Green-Ellis, this was his best year.

Final Thoughts: Bush is a solid back that could have done the job in the Bengals back-field alone. I'm somewhat surprised that the Bengals didn't sign him and I'm also surprised that he signed with a team that has a guy like Forte in the backfield. In the one year that he carried the ball the most, 2011, it worries me that he had a yards per carry average under four-yards, and he seemed to slow down at the end of the season, which concerns me about his ability to start 16 games in a season and then still run hard in the post season, but we'll have to wait and see what he does in Chicago.

In the end, other than his size, there isn't a huge difference between Bush and Green-Ellis. Neither have elite breakaway speed and they are both between-the-tackles style of running backs and they're both reliable. Honestly, I'd be happy whether they signed Bush or Green-Ellis.

Benson came off his third-straight 1,000-yard season in 2011 and of the three running back analyzed here, he's the only one that could have been considered a work-horse back in the last few years. He has been tough and durable and he wants the ball all the time, which is a better sign for a running back than one who doesn't want the ball. However, he has gone through streaks in which he hasn't taken care of the ball, he's been in legal trouble before and he has been perceived not to be the best locker room guy. 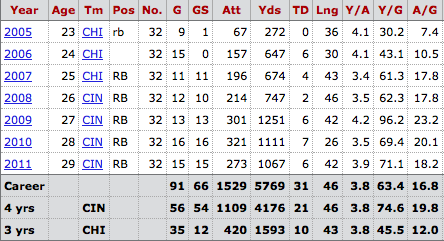 Benson struggled at a few things in 2011. He wasn't able to pick up first downs on short-yardage situations and he has always struggled when it came to catching the ball out of the backfield. Since the Bengals have implemented Jay Gruden's West Coast offense, the team needs their running back to be more active in the passing game, unfortunately, that was not something that Benson was good at. 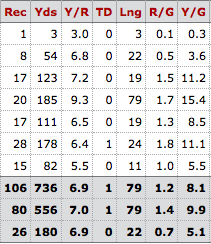 Benson was good at holding on to the ball until the last quarter of the season when he fumbled the ball five times in two games. Luckily the Bengals won both of those games, but if things have gone a little differently, they could have missed out on going to the playoffs because of those fumbles. Pro Football Focus gave Benson a grade of 3.5 in 2011, with a running score of 5.4, a receiving score of --5.2 and a pass blocking score of 2.4. Unlike the other two backs, Benson's best year was not in 2011, his best year came in 2009 when he had a score of 4.5.

Final Thoughts: Benson has been a solid producer over the last four years, but it's time for the running back and the team to part ways. Benson's offseason trouble with the law, his lack of production in short-yardage situations and his attitude all need to go and be replaced with somebody new. That new back in BenJarvus Green-Ellis and likely a drafted running back.

Benson hasn't yet signed with a team and I doubt that he does until teams start to get desperate for a running back or until somebody gets hurt or stops producing. I see him filling in for another team the way he came to Cincinnati in 2008 after the season already started.

In the end, I truly believe that the Bengals are better off today with Green-Ellis than they were without him. Some may rather have Michael Bush, but I think Green-Ellis will surprise those people and help the Bengals continue to make strides in 2012 and beyond.

What are your thoughts.