Since being released by the Cincinnati Bengals, defensive end Antwan Odom has virtually fallen off the NFL landscape. We won't get into the specifics about his time in Cincinnati or its downfall -- failed to produce on the team's heavy investment, Mason home burning, shot in the leg due to being in the middle of a lovers triangle -- but Odom has seen better days.

So what's Odom up to these days? Thanks to the heads up of a loyal reader, Odom will a special guest referee during Saturday night's Alabama Wrestling Federation Main Event, as Road Warrior and Joey Barrett face off against Doink the Clown and Chuckles (by laws of nature, clowns are by default heels -- unless one clown turns on a bigger more evil clown, then that clown is slightly less heel, but still heel in our books). Oh, yea. 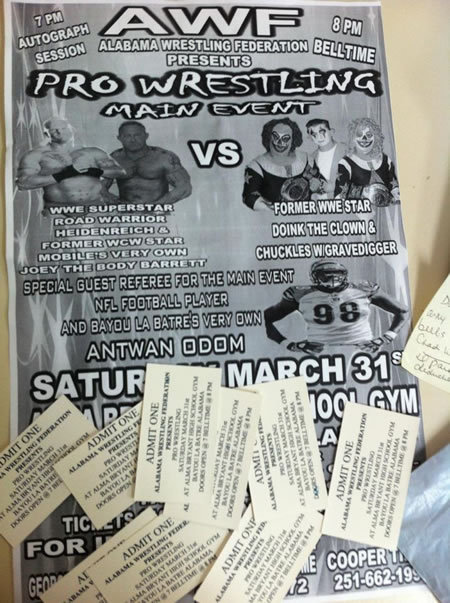 Though to be perfectly honest, is there a position in the world more powerful than a Special Guest Referee? They can speed up count-outs, slow the three-count, or choose to ignore steel chairs to the back of someone's head (aka, every opponent of Mick Foley). Titles can be changed. Heroes facing overwhelming odds. A Stone Cold Stunner on the world's biggest heel igniting the crowd into a frenzy. Actually it doesn't matter whom he does it on. A Stone Cold Stunner = Beer, middle fingers and a great time had by all.

Odom's NFL career may be over, but he's living life as the most powerful man in his home state of Alabama. Life isn't that bad.