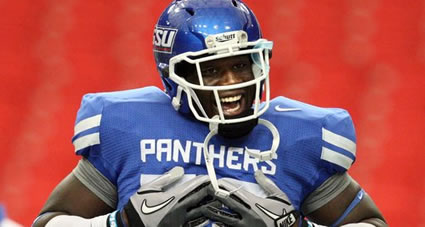 According to the Atlanta Journal-Constitution twitter account that covers Georgia State University sports (that's a mouthful), defensive end Christo Bilukidi has a scheduled workout with the Cincinnati Bengals. Bilukidi has already visited with the New England Patriots with workouts lined up in Atlanta and Oakland.

Bilukidi, leading Georgia State with five quarterbacks sacks, nine tackles for loss and 38 total tackles, is a two-year starter with the Panthers, playing both defensive tackle and defensive end during his career. He was also a team captain.

Scout, Inc. ranks Bilukidi as the 89th-best defensive end, probably not because of any talent deficiencies, rather the complete lack of interest in scouting a team like Georgia State. Just hypothesizing here.

National Football Post has a small scouting report, which says:

Has some initial quickness to his game, can be sudden laterally when side-stepping blockers and is a pretty athletic pass rusher. However, he doesn't sit real low in his stance, gets upright easily off the snap and at times is content to be blocked and won't show much fight trying to disengage vs. the run. He's got the talent to get a look in an NFL camp, but play-to-play consistency is the key for him long term.

Impression: Looks like a FA, but has some talent, upside and size that could allow him to mature into a player.