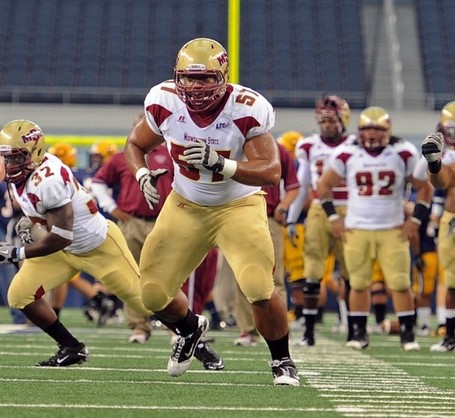 Cincinnati Bengals offensive line coach Paul Alexander recently attended a private workout with Midwestern State guard Amini Silatolu, along with coaches from the Cleveland Browns, Indianapolis Colts and the Chicago Bears. Now one can assume that it's just due-diligence on Cincinnati's part, which is actually quite impressive during most draft seasons, especially if you've followed our prospect charts over the years. However it might be more than that.

According to Carlos Holmes with the Dayton Daily News and BigCProFootball.com, Silatolu is believed to have high placement on the team's big board (he calls it the team's list so we're just assuming big board in this context). Holmes writes:

I’m told that representatives for the Bengals spent two hours or more going over film/board work and roughly an hour out on the field with him.

The 6-foot-4, 331-pound Silatolu dominated his opponent and played with a mean streak finishing plays. He demonstrates powerful drive-blocking skill, quick, strong hands, agility and good reaction at the point of attack. He showed good footwork and anchors well. He’s humble and soft-spoken which is opposite of his aggressive playing style on the field. Silatolu played left tackle at Midwestern State and some teams believe he can play right tackle. His home will likely be at guard in the pros. Of course the downside would be level of completion he played in Div II but the reward is much greater than the risk.

Silatolu has been training with Hall of Fame offensive tackle Jackie Slater and former NFL guard Ed White throughout the draft process to improve his overall technique.

According to Aaron Wilson, Silatolu recently visited with the Pittsburgh Steelers. There hasn't been any reports of Silatolu visiting Cincinnati yet, but that's not uncommon. The Bengals reportedly only hosted A.J. Green and Andy Dalton last year and in 2010 Geno Atkins was surprised that Cincinnati selected him because they showed virtually no interest during the draft process.

Scout Inc. ranks Silatolu as the second-best guard prospect this year and 43rd-best player. They write of his toughness:

Flashes mean streak and the ability to finish one-on-one. Lowers shoulder and delivers blow when asked to kick out defensive ends. Flashes the ability to flat back linebackers. Blocks through the whistle on most plays and doesn't back down but doesn't play every snap with the same level of tenacity. Average upper body strength (benched 225 28 times at the combine) in the weight room.