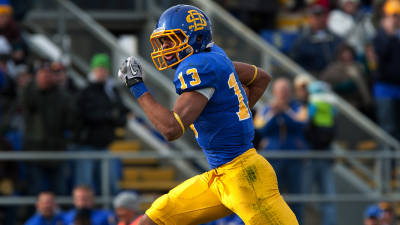 According to Damond Talbot, formerly of Optimum Scouting and now with Mocking The Draft, South Dakota State University wide receiver Dale Moss is visiting with the Cincinnati Bengals (presumably Wednesday). According to NFL Draft Scout, Moss was clocked anywhere from a 4.38 to a 4.45, with a 41.5-inch vertical, during his workout in front of scouts at the Dakota Dome in Vermillion in late March.

I would say Randy Moss type of player, a big, athletic receiver. I think size and similarities are alike, but for a new player, I would say AJ Green, we both make the plays on the ball.

The 6-foot-3 wide receiver finished his final season with 61 receptions for 949 yards receiving and six touchdowns.

Scout Inc. ranks Moss as the 111th-best wide receiver prospect entering the 2012 NFL draft -- though Scout, Inc. service tends to get a little down on small school prospects.