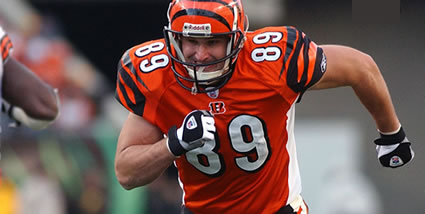 Former Cincinnati Bengals tight end Matt Schobel filed a suit against the NFL in the U.S District court for the Southern District of Texas this week. The suit is being filed as a result of "head injuries" that he suffered during his NFL career (doesn't say when) and according to The Big Lead, it "appears that Schobel is the only party of this particular suit." According to Peter Barzilai with the USA Today, who cites NFL Concussion Litigation, there are approximately 1,200 total former players/plantiffs that have filed at least 50 suits against the NFL. You can read the complain here.

Schobel, a former Bengals third-round pick from the 2002 NFL draft, spent four seasons with the Bengals, posting 90 receptions for 938 yards receiving and nine touchdowns. After the 2005 season, Schobel left Cincinnati to sign a five-year deal with the Philadelphia Eagles, but only played three seasons, generating 27 receptions for 332 yards receiving and three touchdowns.