Akili Smith: Biggest Quarterback Bust In The Past 15 Years?

Share All sharing options for: Akili Smith: Biggest Quarterback Bust In The Past 15 Years? 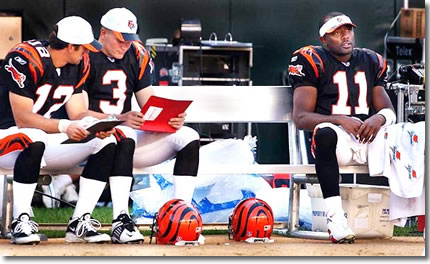 About this time every year, we always reflect on just how bad a Bengals draft could be -- it's a reflective inner-journey to one's soul. And every year, we remember one particular selection that send said soul to damnation. Bill Barnwell, former contributor at Football Outsiders who left to join Bill Simmons' venture at Grantland (ESPN affiliation), devised an interesting system, attempting to mathematically classify prospects as either successful or a bust.

So here's how the system works: We wanted to measure how a player did during the general length of his rookie contract, so we're only going to consider how he performed during the first five years of his NFL tenure after being drafted. That means we can only start the player pool at 2007, since they were the last draft class to play five full seasons, so we'll go back to 1997 in order to have a full decade of draftees. We then gave the player credit for achieving various tasks as follows:

Using that system, former Bengals quarterback Akili Smith grades as the biggest quarterback bust from Barnwell's experiment, which dated from 1997 through 2007 -- and we might as well just broaden the subject as the "last 15 years".

We've really forgotten as a culture just how bad Akili Smith was. He's basically the Ryan Tannehill nightmare; after just two years of action in college, Smith's ideal size and arm strength pushed him up draft boards during the spring of 1999. He eventually settled in as the third franchise quarterback in a three-man group, and the Bengals made him the third overall pick behind fellow signal-callers Tim Couch and Donovan McNabb. McNabb was good, and Couch was middling, but Smith was abysmal. He completed 46.6 percent of his passes as a pro, threw 13 interceptions against just five touchdowns, and was out of football after 17 starts in four years. In his one year as the regular starter in Cincinnati, the Bengals offense averaged 11.6 points per game. Tannehill can't possibly be that bad, right?

So remember. No matter how poorly the Bengals draft outside of your vision of acceptance, it could be worse. It could always be worse.