Share All sharing options for: 2012 NFL Draft: With The No. 116 Pick The Cincinnati Bengals Select Georgia Tight End Orson Charles

Generating plenty of praise around the league by draft experts and NFL analysts, the Bengals hope to continue their tend of having one of the best drafts in the NFL this year. Now they're at the stage of stock-piling their roster and that's exactly what they did. With the No. 116 pick of the 2012 NFL draft, the Cincinnati Bengals select Georgia tight end Orson Charles.

Charles is a big, athletic and flexible tight end. He has decent size and runs pretty well. He was a regular starter the last two years and had over 500 yards receiving as a junior. He is capable of blocking on the line immediately and is a very reliable short-yardage pass-catcher. If he can get a little bigger, he'll be more of a mismatch against linebackers in the short game, and could be drafted as early as the third round.

Charles is an athletic mover, especially when triggering off the line of scrimmage. He has good power, can fight off hand jabs at the line and is savvy enough to get back to his route. He uses his body well underneath to shield himself from defenders when working against zone coverage and has very reliable hands, which could make him a go-to option on third downs in the NFL. He is still developing as a blocker but has all the physical traits, including strength and a solid frame, to be successful. He is competitive and will likely work hard to hone his skills.

Charles is a very straight-line runner and could have issues separating from NFL defenders, who will be savvy enough to diagnose his routes. He looks unaware in-phase and is far from being able to set up defenders or get them off-balance. He is flat-footed and has trouble bending to break quickly in his routes. He has decent wiggle and speed after the catch but isn't much of a deep threat and was utilized mostly in the short passing game at Georgia. He beat defenders in college with size and power, but that will be much more difficult to do in the pro game 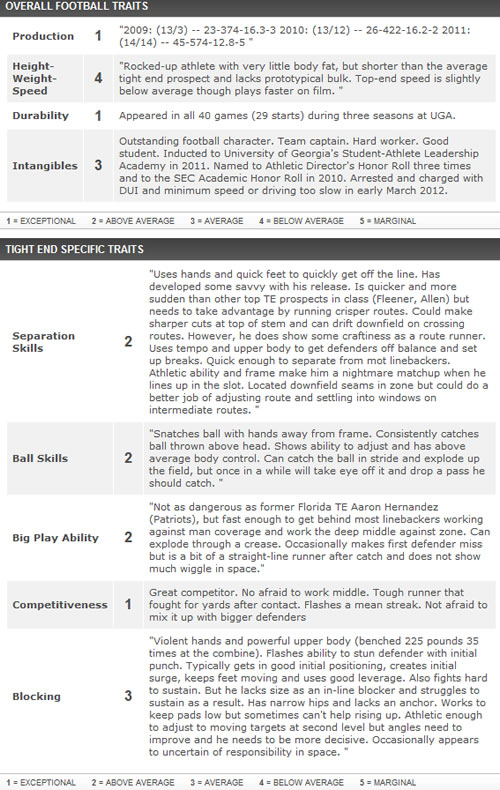