Share All sharing options for: 2012 NFL Draft: Bethune-Cookman's Ryan Davis Working Out For The Bengals Today 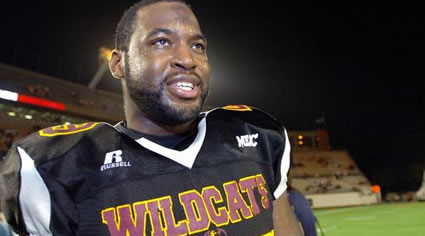 Aaron Wilson of scouts.com has a good pulse on a lot of prospects' scheduled visits and workouts with NFL clubs. He notes that one particular prospect, Bethune-Cookman's Ryan Davis, will be working out with the Bengals today. Davis is projected to be one of those "'tweener" type of defensive players, slated to be an outside linebacker and/or defensive end at the NFL level.

Davis didn't receive a Combine invitation, but has the skill set and size (6'3", 260 pounds) to be an effective NFL player. He's been slowly moving up teams' draft boards that employ a 3-4 defensive scheme and even though the Bengals don't use that formation, head coach Marvin Lewis has always been searching for the next coming of Peter Boulware.

20 minutes ago via web · Reply · Retweet · Favorite · powered by @socialditto

Davis has been clocked around the 4.79-second range in the 40-yard dash and would be the first Bethune-Cookman prospect to be drafted since Packers safety Nick Collins was taken in the second round in 2005. Last season, Davis racked up an impressive twelve sacks and 21.5 tackles for loss. Though he didn't participate in Indianapolis in February, Davis was invited to work out at the University of Miami's Pro Day and by most accounts, he had an impressive showing alongside Miami guard Brandon Brooks. Davis wowed scouts with his athleticism and fluidity during drills and his draft stock has been steadily rising since.

If you're looking to see which prospects that the Bengals have worked out and/or visited with, check out our chart that we've created showing the team's activity thus far.