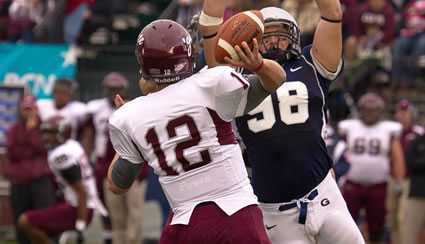 Georgetown University defensive lineman Andrew Schaetzke is one of a handful of players that will take part during this weekend's rookie minicamp in the hopes of signing on with the team. Schaetzke was named the Eastern College Athletic Conference defensive player of the year during February's Eastern College Football Awards Banquet, generating 13 quarterback sacks, 22.5 tackles for loss, an interception, five passes broken up, three forced fumbles and 69 total tackles.

"I want to give football a shot for as long as I possibly can," Schaetzke told the Toledo Blade. "Once that stops, I'll try to get a job in the real world."

If Schaetzke, who generated 30 career quarterback sacks in college, earns a spot on the roster, he'll become the first Hoya to earn a spot on the NFL roster since the Washington Redskins signed Alex Buzbee on December 19, 2007.

Schaetzke will be one of a handful of players trying out with the team in the hopes of signing a contract, which includes local products such as quarterback Tony Pike, tight end Josh Chichester and safety Patrick McClellan.