And Then There Were Five: Bengals Release Chris Riley After Failing His Physical

Share All sharing options for: And Then There Were Five: Bengals Release Chris Riley After Failing His Physical 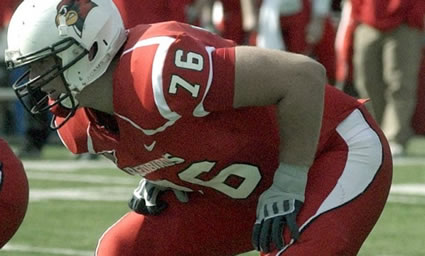 The Cincinnati Bengals announced on Tuesday that offensive lineman Chris Riley failed his physical, placing him on waivers. Riley, who was claimed by the Bengals last week with defensive tackle Vaughn Meatoga, is the fifth player that the Bengals have had to release after four undrafted free agents failed their physicals heading into the team's rookie minicamp last weekend.

Riley's release brings the team's overall roster back to 86 players, with four spot available before reaching the 90-man roster limit.

We don't fault the Bengals for signing players that eventually fail their physicals. That's on the players. In fact it's a good thing that the team's medical staff is weary enough to ensure they don't make the same mistake as they did two years ago with Antonio Bryant (though that was at a completely different level of screwy).