On This Date In Bengals History: AFL Awards Cincinnati With A Franchise

Share All sharing options for: On This Date In Bengals History: AFL Awards Cincinnati With A Franchise 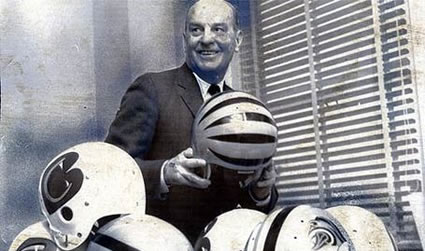 On this date in 1967 the American Football League awarded Cincinnati the league's tenth franchise. At the time there were five different ownership groups seeking to become owners, but there were really only two groups with a realistic shot to become the Bengals eventual owners. One was headed by Paul Brown, who had been actively promoting football in Cincinnati for some time and a lawyer named John Wiether, who was a former guard for the Detroit Lions and former coach for the University of Cincinnati basketball team.

One of the reasons that Cincinnati received a football team was due to the merger between the AFL and NFL, which was negotiated and agreed on June 8, 1966. According to the terms of the merger, both leagues were required to add a new franchise by 1968. The NFL awarded a team to New Orleans (becoming the Saints) while the AFL gave a team to Cincinnati.

After months of speculation the league awarded Paul Brown the Cincinnati in the summer of 1967. Brown had been out of football since 1963 after being relieved of his duties with the Cleveland Browns.

And as they say, the rest is history.