Share All sharing options for: William And Mary Linebacker Jake Trantin Gets A Tryout With The Cincinnati Bengals 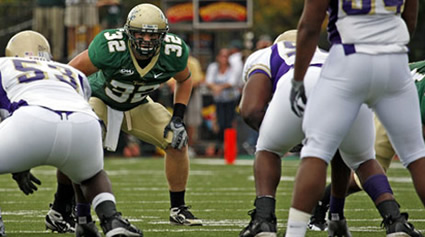 The Cincinnati Bengals released their undrafted free agent signings, as well as a list of players the team is hosting for tryout during the team's May 11-13 minicamp. The local players include former University of Cincinnati quarterback Tony Pike and cornerback Reuben Haley, Louisville tight end Josh Chichester (also from Lakota West) and Eastern Kentucky safety Patrick McClellan (from Moeller).

According to The Virginia Gazette, William and Mary linebacker Jake Trantin has also been invited to the Cincinnati Bengals rookie mini camp.

One of the Tribe's top defensive players throughout the past few seasons, Trantin finished his career with 250 tackles, 21.0 tackles for a loss, 4.5 sacks and four interceptions - one of which he returned for a touchdown. The Odenton, Va., native earned second-team all-conference honors as a sophomore after leading the Tribe with 90 tackles, while he posted 84 stops as a senior last fall.

Trantin, who is the nephew of Marty Schottenheimer and cousin to Brian, was listed as the 19th-best linebacker prospect according to ESPN's Scouting Inc. service. Pro Football Weekly's prospect pages writes:

Redshirted in 2007. Started all 11 games in ’08 — seven outside, four inside — and recorded 76 tackles, 6 1/2 for loss and half a sack with four pass breakups and two forced fumbles. Was the Tribe’s leading tackler from his middle linebacker spot in ’10 — started all 14 games and produced 90-10-2 1/2 with three pass breakups, three interceptions (60-yard TD against Weber State) and a forced fumble. Did not play in ’10 — sustained a concussion prior to the season then informed coaches he would leave the team to deal with family issues. Returned to the team in ’11 and regained his starting spot before the season. Team captain.