Brandon Thompson: I'll Do Whatever It Takes For The Bengals To Win

Share All sharing options for: Brandon Thompson: I'll Do Whatever It Takes For The Bengals To Win 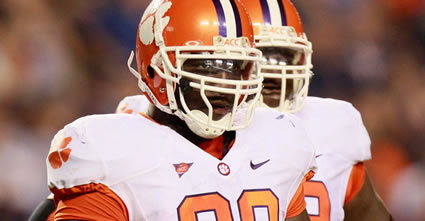 When it was announced that Clemson defensive tackle Brandon Thompson would become Cincinnati's fifth draft pick, selected at No. 93 overall, some didn't react with a strong emphasis of joy. Don't get me wrong. Many are seeing the value of having two impressive defensive tackles, while others wonder why the team decided on the selection in the first place (often not offering alternatives of players the team should have drafted).

Regardless of what Bengals fans think, Thompson, who is excited about joining the Bengals, is ready to make an impression, per Carlos Holmes with the Dayton Daily News.

"It was a blessing to be drafted by a great organization such as the Bengals," Thompson said Thursday. "I plan on coming in and doing what’s required of me. Whatever they ask of me, I’ll do. I’ll do whatever it takes for this team to win. I want my new teammates to know they can depend on me to get the job done. I’m excited and ready to jump on ship and get this thing started."

Thompson on his meeting with Bengals head coach Marvin Lewis:

"It was amazing meeting Coach (Marvin) Lewis at the combine," he said. "I knew then I wanted to play in Cincinnati. He’s a great coach and I’m ready to start playing for him. I’m just happy to be a Bengal."

Thompson on his work ethic:

"I like to study my opponents and myself a lot," Thompson said. "I love watching film and being prepared. That’s the only way to improve your game. Aside from being physical, I think my best attribute is my knowledge of the game."