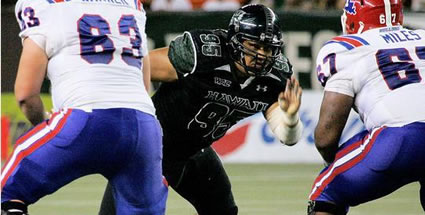 According to Joe Reedy of the Cincinnati Enquirer (who tweeted it first) and the Bengals.com twitter account, the Bengals acquired two players off waivers in guard Chris Riley (Tampa Bay Buccaneers) and defensive tackle Vaughan Meatoga (Washington Redskins).

Riley is a name you may remember. He was signed by the Bengals as an undrafted free agent last year, but waived during final cuts last year. Tampa Bay signed him to their practice squad -- which is the theme with the Buccaneers it seems.

Meatoga was signed by the Redskins as an undrafted free agent out of Hawaii on May 3, but the Redskins waived him on Monday -- three days later.

Meatoga possesses a shorter, thickly built frame with natural girth through his upper body. He displays decent bend sitting into his stance and possesses a "plus" first step off the football. He gets into contact quickly, can keep his lap level down when working the bull rush and he can create a push inside. He looks violent with his hands when trying to disengage, but displays only average awareness and will take himself out of some plays. However, when he stays low, he can create penetration inside. He's a bit "straight-line-ish" as a rusher, though. When trying to disengage he will get upright, gives up leverage and is easy to stick to.

Impression: He displays some get off burst, short area quickness and hand violence, but isn't a dynamic pass rusher and will have a tough time vs. the run early. He needs to get a bit stronger, but is worth a late round look.