Share All sharing options for: Jacob Bell Reiterates Decision To Retire Based On Risk To His Health 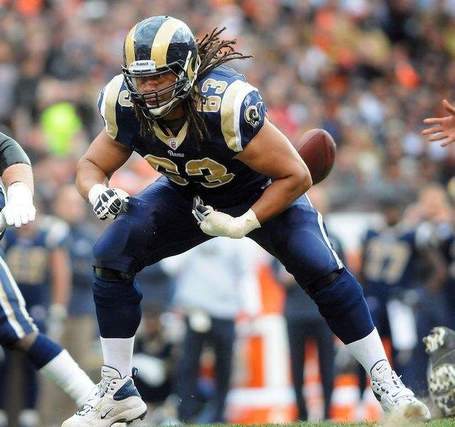 With Jacob Bell's decision to retire, we wonder if the 1,800 former players suing the NFL, or the overall awareness regarding concussions, will start weighing heavily into players' decisions to leave the sport. We're not talking about superstars in the middle of multimillion dollar deals -- money is a huge motivator to keep playing. Rather the backup and special teams players, the bottom half of the roster making the minimum and the inherent risks to play football in the NFL. Or is the information overload being displayed publicly a matter of an over-reactionary society?

Either way it's the reason why Jacob Bell decided to retire. And he confirmed that through Jim Thomas with the St. Louis Post-Dispatch.

"There were a lot of factors that went into it for me," Bell told the Post-Dispatch in a phone interview Tuesday night. "I've had a lot of fun playing. I've seen a lot of things. I've played in a lot of games. The reality is that for me it came down to risk and reward. I think you've always got to weigh that out. At some point, you've got to kind of figure out what you're in the game for.

"One of my biggest concerns when it comes to the game in general is my personal health. One thing that's obviously on the minds of a lot of people lately is brain research and all the stuff that's going on with that. One of the big things that I thought about when I was considering this is how much do I love the game? How much can they pay me to take away my health and my future and being able to be with my family and just have a healthy lifestyle?"

And on Tuesday Bell told Joe Reedy of the Cincinnati Enquirer:

"In the NFL we're modern-day gladiators and we sell our soul to the game of football for a price, but what is that price? Everyone has a price and for me I wanted to make sure that I don't have any regrets about my future in regards to what I've done in the NFL. At this point I can walk away with no regrets and leave on my own terms where the NFL didn't force me out and I made that decision on my own."

You have to appreciate Bell's honesty in the matter. And we still have to wonder if there will be other minimum-paid veteran players that follow Bell's lead.