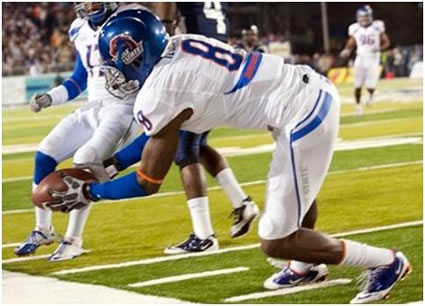 According to Eric Edholm of Pro Football Weekly, the Cincinnati Bengals have signed their first pick from the 2012 draft class. Bengals fifth-round pick and selection No. 167 overall, safety George Illoka, has reportedly agreed to terms on a four-year deal on Wednesday. The Bengals won't announce the agreement until after the contract is signed (and sometimes a little while after that).

Iloka becomes the fifth safety signed onto the 2012 roster (not that it was any doubt before), joining starting free safety Reggie Nelson, starting strong safety (for now) Taylor Mays, Robert Sands and Jeromy Miles.

During the reactionary days following the 2012 NFL Draft, Iloka has been mentioned several times as a player that can bring an immediate impact while as a steal selected so late during the draft, or bang for your buck as some might call it.

Either way I'm not sure if he'll have much of a contribution on defense in 2012; rather his overall role might be relegated to special teams work for the time being.