The Jerome Simpson Highlight(s) Of The Year Reel

Share All sharing options for: The Jerome Simpson Highlight(s) Of The Year Reel

Jerome Simpson. Maybe he didn't always catch the football, run the best routes or thought internet orders didn't apply to the United States Legal Code. But he could flip, flop and do some amazing things with a deep embrace of the football. Everyone knows that play.

With 2:54 remaining in the second quarter on Arizona's 19-yard line, Bengals quarterback Andy Dalton stands four yards behind Kyle Cook in shotgun formation on second-and-eight. Rather than describing the formation and routes in great detail, how about a crappy graphical representation (that took me over an hour to create). 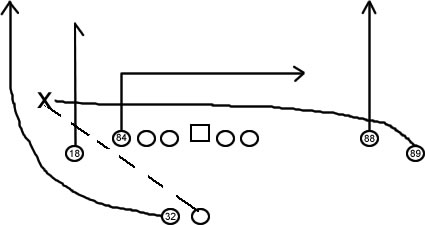 But it's not the routes, nor the pass that people will remember most. It's this:

Yes. The Flip. It was awesome. Unexpected. Highlight fodder for the mainstream media. The touchdown also gave Cincinnati a 17-0 lead in a game that the Bengals would eventually only win by seven points.

Who cares about that though. The Jerome Simpson highlight of the year, for me, wasn't the flip. It was the flop. Wait for the 21 second mark, after Simpson tried pulling Browns linebacker Scott Fujita off the pile (because Andre Smith allowed Jabaal Sheard to explode off the edge, sacking Andy Dalton who lost the fumble).

Fujita and Simpson were called for offsetting unnecessary roughness penalties and the Browns took a 17-7 lead four plays later with nine seconds remaining in the second quarter. Cincinnati would go on to outscore the Browns 16-3 in the second half, winning the game 23-20.

What were your favorite highlights of the 2011 season?