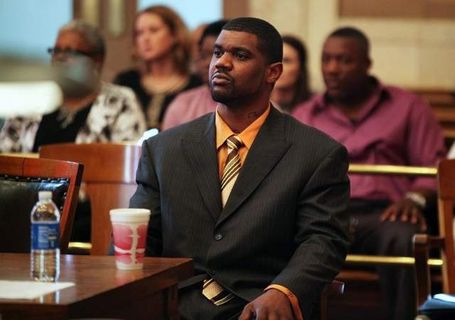 Former Bengals, Broncos and Buccaneers linebacker Nate Webster was found guilty on four counts of unlawful sexual conduct with a minor on April 25. Webster returned to court on Wednesday for sentencing, and the Judge wasn't forgiving. Kimball Perry tweets that Webster was sentenced to 12 years in prison while paying the victim's family $3,400 "in restitution for her counseling as a result of his crimes."

The Judge said that there was overwhelming evidence that the minor was 15 years old, and not 16 which Webster's legal team argued (that one year is the difference between spending 12 years in prison and being a free man). Just before announcing his sentence, the Judge said that the "minimal sentence in this case would be a travesty of justice."

Other tweets from Kimball Perry:

Kimball Perry
@kimballperry Webster "stole and took the innocence of a child" and will be punished for it.
37 minutes ago via TweetDeck · powered by @socialditto
Reply · Retweet · Favorite

Kimball Perry
@kimballperry Tieger: Reduce Webster's sentencve if he admits right now he lied about the victim and how old shge was when tis started "and that he really
39 minutes ago via TweetDeck · powered by @socialditto
Reply · Retweet · Favorite

Kimball Perry
@kimballperry Seth challenges to Webster: "He had a smug, arrogant attitude in court" during trial, blasts him for saying the vctim ws lying.
40 minutes ago via TweetDeck · powered by @socialditto
Reply · Retweet · Favorite

Kimball Perry
@kimballperry Judge: Webster shown no remorse until today. "He was basically selfish and interested inhis own self-gratification in this case."
30 minutes ago via TweetDeck · powered by @socialditto
Reply · Retweet · Favorite