Bengals Banter I: Media Identifies Nate Webster As A Bengal Despite Only Playing Four Games

Share All sharing options for: Bengals Banter I: Media Identifies Nate Webster As A Bengal Despite Only Playing Four Games 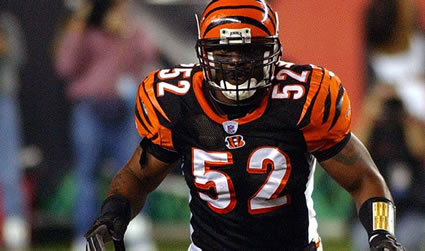 + Predictably following the Judge's 12-year sentence on former NFL linebacker Nate Webster, reports immediately identified him as a former Cincinnati Bengals player. Despite the fact that Webster played the least amount with Cincinnati than he did with any other team, the Bengals surface on the "how to create a headline" spreadsheet originally developed in the "it's not about fairness" portion of national media 101. Most networks carried the same Associated Press article with the first written paragraph being:

Former Bengals linebacker Nate Webster was sentenced Wednesday in Ohio to 12 years in prison for having sex with the underage teen daughter of a former assistant coach for the Cincinnati team.

Some headlines hours after sentencing: 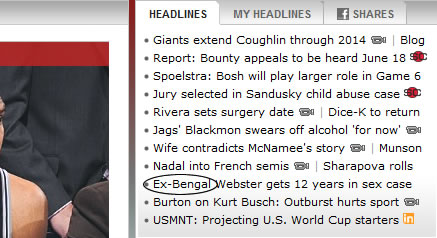 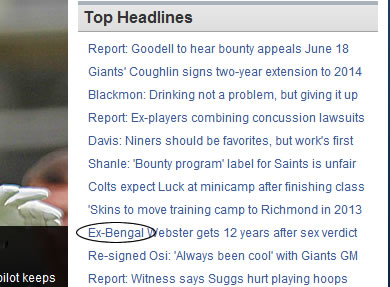 ESPN Insider Adam Schefter got into a slight pissing war with some of his followers when Schefter identified him as a former Bengal and not a former NFL player. Eventually he corrected, much like one does when pouting after conceding a losing argument, presumably because Bengals fans responded en masse. The hilarity really surfaced when other followers began petting Schefter as a father would an eight-year old all because the mighty Bengals fanbase didn't understand the quick identification of our team.

Now some might ask (and they should) in the grand scheme of things, why are you focusing on this when a young girl remains as Webster's victim? It's precisely because of what he did that we're focused on it. We know he was a former Bengals player -- he played all of four games. But we've also said our peace on how horrific Webster's actions were.

We're not naive enough to think that the national media is anything more than a money making machine. Identifying one as a former Bengals player capitulates the demands of routine and good forbid the media actually breaks those bonds.

In the end this is nothing more than another example of a seamless transformation into money-making empire, which drives the news on all levels today. And once we remind ourselves that every news organization is out to make money and then inform you, the better off we become.