The Cincinnati Bengals announced that wide receiver Jordan Shipley has been released. After suffering an ACL injury last season, Shipley spent the offseason rehabilitating and when he eventually returned during the preseason, he struggled to get shake the rust, while Andrew Hawkins was continued his rising superstar status on the team's depth chart. Through two games Shipley was often buried as the team's slot receiver, making his first entrance late in each game. He was only targeted twice in two games, with one reception. It became painfully obvious that Shipley's chances of making the team were shrinking. After the team announced his release, Joe Reedy tweets that he "saw Shipley walking to the bus last night with a huge icepack on his knee. The knee was not responding."

[Note: The following was a scheduled posting that talked about Shipley's shrinking chance to make the team after the Bengals beat Atlanta]

Obviously wide receiver A.J. Green is locked into a roster spot. If he's not, I'm quitting. Then I'm shooting my laptop, burying the laptop with my shovel and then shooting my shovel. Most likely Armon Binns, Brandon Tate (more on those two later), Andrew Hawkins and Mohamed Sanu have a home in Cincinnati this year on the 53-man roster. That basically leaves one spot for a collection of receivers either hurt (Ryan Whalen) or having a hard time shaking the preseason rust (Jordan Shipley). It's also presenting a great opportunity for another Bengals rookie receiver to shine. For the second time in as many weeks rookie wide receiver Marvin Jones hauled in a 40-yard reception -- which we detailed here.

Jones' performance and participation (also worked as a punt returner and recorded a carry) have been impressive enough that it's hard for one not to believe that he's a leading candidate to be the sixth member of the team's receiving roster. Jordan Shipley, who is one of two wide receivers (Kashif Moore) without multiple receptions this preseason, was noticeably absent against the Atlanta Falcons. With 1:01 remaining in the third quarter on second-and-16, Shipley was the slot receiver on the left.

The route was actually very good. He drifted outside for three yards before cutting inside on a slant. The move generated plenty of separation against cornerback Dominique Franks. 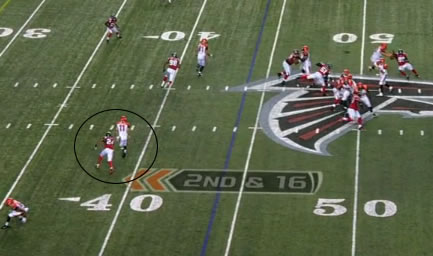 Zac Robinson's pass was a little high, but within reach of Shipley's outstretched hands. Though if one were to grade the route, it was very Shipley-like from 2010. But it wasn't that play that we're knocking Shipley as a favorite to make the team -- it's the rest of the game. Granted we don't have a number of total snaps Shipley took during the game. This was the only time Bengals quarterbacks targeted Shipley Thursday evening, either meaning he's not getting open or the coaching staff isn't putting him in the game -- both are knocks no matter how you view it.