How The Cincinnati Bengals Failed To Contain Aaron Rodgers

Share All sharing options for: How The Cincinnati Bengals Failed To Contain Aaron Rodgers

One of the biggest issues Thursday night against the Packers was Aaron Rodgers. Suppose that's predicable considering Rodgers is one of the elite quarterbacks in the NFL today. But it wasn't necessarily his arm -- the secondary picked him off once and his rating was a 57.8 -- though he did have abuse Leon Hall, who always seemed a step or two late in coverage. No. It was Rodgers' legs. Over-aggression by Cincinnati's pass rush opened gaps that allowed Rodgers to exploit. In the first half alone the Packers quarterback generated 42 yards rushing on four scrambles, two of which resulted in touchdowns. Don't get me wrong. The Bengals did have a decent rush Thursday night, but they failed to make contact, often overshooting their lanes.

And it happened early.

Within a minute of the game's opening kickoff, Rodgers feels intense pressure on first down from Green Bay's 35 yard line. Jamaal Anderson swings around Rodgers' right forcing the quarterback into the pocket. Geno Atkins was an asteroid up the middle, but the quarterback avoided him behind the block of his lineman. At this point all six pass rushers, with Thomas Howard and Roddrick Muckelroy adding to their efforts, were near the line of scrimmage, submerging the pocket. Rodgers found a massive gap up the middle and took off on a 14-yard scramble. 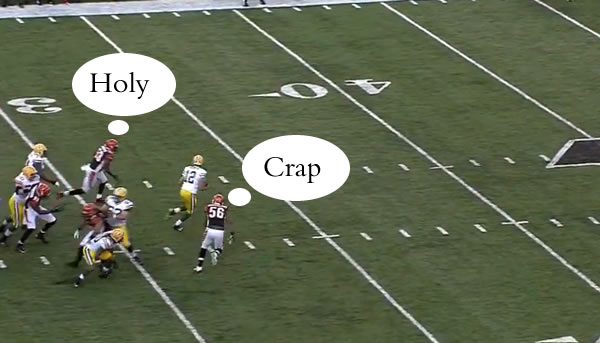 Eventually the possession would stall (see: Atkins, Geno), but Cincinnati's offense's response was quiet, mute and deaf to the shouts of decency. Eventually Green Bay, with their second possession, traveled down the field, seemingly at will, setting up a second and two from the Bengals 12-yard line with 8:04 remaining in the first quarter. 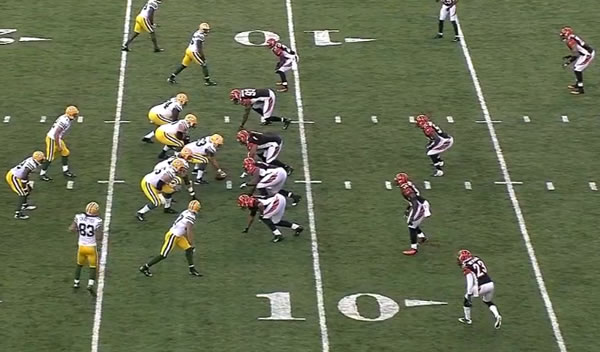 After the snap and five-step drop, Rodgers felt an overwhelming urge to leave the pocket with pressure building around. Jamaal Anderson, Devon Still and Domata Peko were closing down to Rodgers' right while Michael Johnson took a wide angle, trying to speed rush past the left tackle. It naturally opened up a massive lane to the left, with only Nate Clements patrolling the area, but with momentum away from Rodgers eventual lane.

Clements recognized it. But his momentum, along with Rodgers already at full speed (and it's not like he's a slouch) gave the quarterback the eventual advantage and a 7-0 lead. 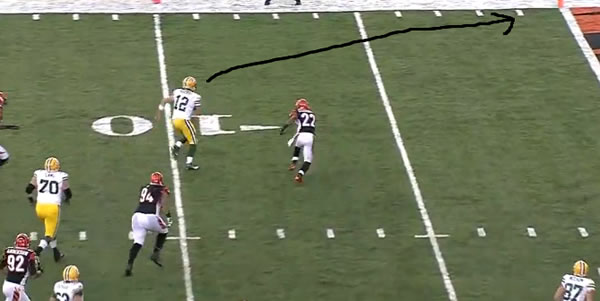 Five minutes remaining in the first quarter on second-and-one from Cincinnati's 15-yard line. Aaron Rodgers fakes the handoff to Cedric Benson, who had gained 17 yards on two rushes, and rolls out to the right. The Bengals bit on the fake hard, probably fueled by a desire to ensure Benson doesn't embarrass them. 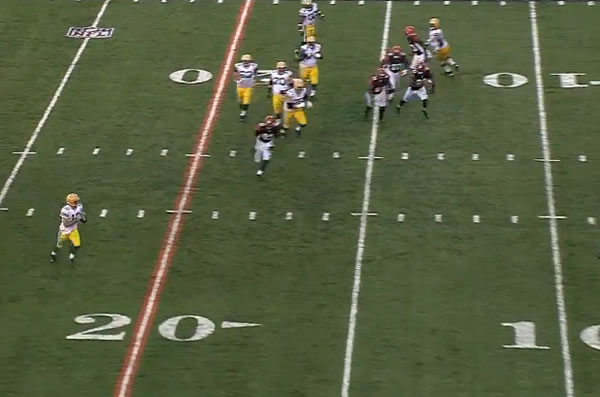 Rodgers slide to the four-yard line.

Following Michael Johnson's impressive deflection of a block that dropped Cedric Benson for a one-yard loss, the Packers are on Cincinnati's five-yard line. Again Rodgers feels pressure, specifically from Jamaal Anderson, forcing the quarterback to step up. However Geno Atkins, shoving the offensive lineman back, was all asteroid again. Thanks to Anderson's momentum, taking him around the pocket, a natural gap formed for Rodgers to escape. 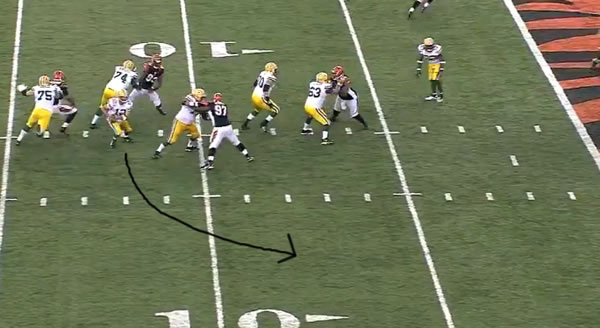 Rodgers would scramble a handful more in the second quarter, but nothing as significant as the first, rushing for 42 yards and scoring two touchdowns.