Share All sharing options for: Baltimore Ravens Humble Expectations For The Cincinnati Bengals

Expectations once again rose during the offseason. A playoff berth last season, combined with a returning defense that finished in the top-seven. An NFL draft that was widely praised along with the observation of growth from guys like Andy Dalton, A.J. Green, Geno Atkins and Carlos Dunlap (who missed Monday's game with an injury).

Sure the Baltimore Ravens were favored and after Monday Night's thrashing, we can see why, readily admitting their superiority as they're riding a four-game winning streak against Cincinnati. Yet none of us expect this. A performance so dominant that the Bengals defense reverted to a brand of football that humbled unrealistic expectations. 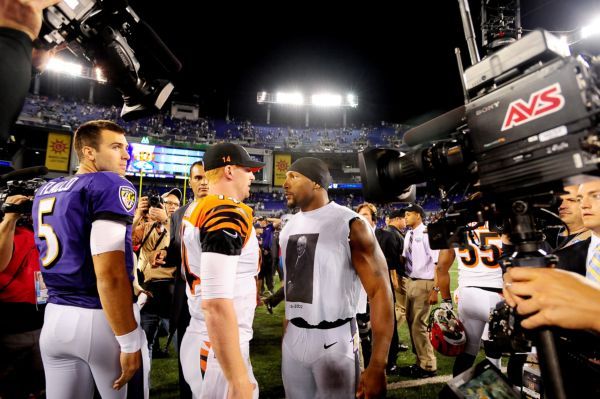 It's only one game and how a team plays in week one doesn't have the same weight as the closing contents to finish the season. The world isn't ending and a 13-10 loss carries the same value as a 44-13 loss in front of a national audience. Unless you believe in that momentum carrying beyond into subsequent games; alternatively the same works for inspiration, depending on the makeup of your team.

But Cincinnati's loss on Monday night was rough. It challenged everything we expected, what we know and had hoped. Jermaine Gresham was a massive disappointment, playing to his career-based theme of failing to achieve the unwarranted expectation that keeps following him. He's like the Keith Rivers of offense; effective when he contributes, but hardly someone that makes memorable plays.

On the other hand there was some good. Cincinnati's rushing offense was very solid, generating 129 yards rushing, lead by the newest running back BenJarvus Green-Ellis. Andre Smith and Kevin Zeitler had good games, especially Smith who was mauling Ravens for lunch. Andrew Hawkins should be described as the No. 2 receiver, despite playing more slot. His play was a highlight and inspiring. 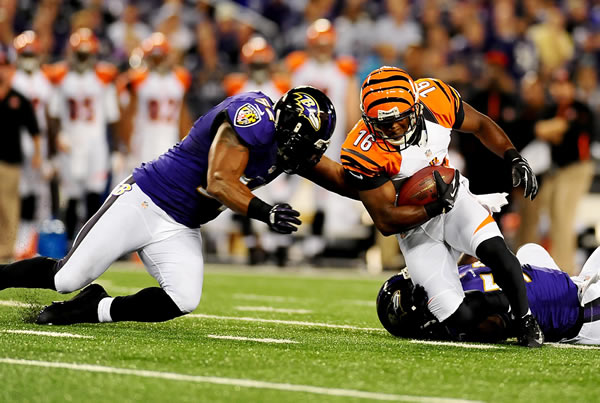 Yet the 31-point loss deflates the energies acquired from finding good from Monday's crushing defeat, a kick to the stomach. A realization that we, as Bengals fans, have once again over-valued this team heading into the first week of the season. That's not to say they won't rebound, but that's the kind of loss we witnessed on Monday. It's extremely hard to believe that right now. And while the schedule will ease up, it would have been nice if Cincinnati at least showed that they belonged with a statement game against one of the preseason favorites.

RAVENS JUMP OUT TO A QUICK START

On the very first play of the game, quarterback Joe Flacco faked a handoff to running back Ray Rice, targeting the left side of the offensive line. Without a moment's hesitation Flacco launched an arching pass down the middle of the field with Torrey Smith beating Leon Hall by a step for a 52-yard reception. Though the longest play of the game, Flacco would end the evening completing 7 of 10 passes that traveled 15 yards or more downfield, per ESPN's Stats & Info service. Four of those passes were completions of 25 yards or more. 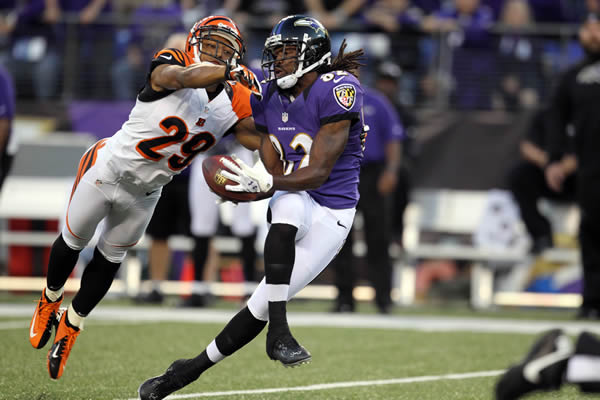 It was evident on the following play, a six-yard run by Ray Rice, that the Ravens had every intension on doubling-down the point of attack; which is generally consistent with most inside runs. Geno Atkins was rocked by a duel collision from Michael Oher and Ramon Harewood. Unfortunately no one else stepped up. Rey Maualuga was meandering near the point of attack when a shove by Harewood forced Maualuga to give ground.

A poor throw on second down setup third down and four from the Bengals 21-yard line. Joe Flacco, in shotgun, pump fakes. Geno Atkins, lined up at defensive end on a three-down formation, loops around Domata Peko and crashes into Flacco for the quarterback sack.

ANOTHER BAD FIRST POSSESSION BY THE OFFENSE

During the preseason the first possession of each game went like this, in order: three and out, fumble, three and out, 37-yard field goal. Time to break trends, right? Wrong. Dalton slightly overthrows A.J. Green on first down and BenJarvus Green-Ellis suffers from a poor blocking scheme that left Ray Lewis unblocked (how do you NOT account for him). On third and seven from the Bengals 24-yard line with 12:04 remaining in the first quarter, Bernard Pollard loops around on a blitz, brushes off a shockingly ineffective BenJarvus Green-Ellis block and knocks the football sideways for an incomplete.

Make that three three and out possessions, a fumble and 37-yard field goal during the Bengals first possession of a game, dating back to the preseason.

BRANDON TATE'S SPECIALS TEAMS NOT SPECIAL AT ALL

After the Baltimore Ravens took a 10-point lead with over six minutes remaining in the first quarter, Justin Tucker bounced the following kickoff into the endzone. Tate grabbed the football seven yards deep and near the back left pylon. Despite Cedric Peerman's pleas to take a knee, Tate returns it 15 yards to the Bengals eight-yard line. Thankfully it wasn't a mitigated disaster because the Bengals would go on a 76-yard drive that resulted in a field goal.

Starting the second half Justin Tucker launched the opening kickoff deep into the endzone. Cedric Peerman noticably ran to Tate with a hand up obviously imploring Tate to take a knee. Thankfully Tate missed the kick and the football bounced out of the back of the endzone.

No one. That was the number of the players waiting for Torrey Smith on a 13-yard end around to begin Baltimore's second possession. It was as if an end around was unknown quality innovated by offensive coordinator Cam Cameron prior to the game Monday night. However the scheme was short lived. Following the 13-yard pickup, a botched handoff between Flacco and Anquan Boldin led to a 10-yard loss and three plays later, Boldin picked up three with a patiently waiting Leon Hall anticipating the trickery.

However the story of Cincinnati's defense could be described with 9:46 remaining in the first quarter. At Cincinnati's 45-yard line, the Ravens need 15 yards to convert a third down. Jacoby Jones ran to the first down marker, flipped around and caught Joe Flacco's 16-yard pass for the first down. Terence Newman, covering Jones on the outside, momentarily stalled with a "I didn't expect that route" reaction before form-tackling Jones into the turf. First down.

Three plays later and the Cincinnati Bengals defense faced another situation that could present glory from an otherwise inglorious unit. With 7:22 left in the opening quarter, the Ravens decided to go for it on fourth down on the Bengals 20-yard line, needing only one yard to convert. Traditionally when opposing offenses need one yard to convert, defenses tend to think run. Credit to Cam Cameron to call a Ray Rice swing route with Flacco rolling out to the right to avoid the intense collisions that's usually associated with short-yardage runs.

Ray Rice eventually walked into the endzone, virtually untouched, giving the Ravens a 10-point lead on the seven-yard touchdown run.

THE BENGALS FIND THEMSELVES SCORING POINTS

With the Ravens piling on an early 10-point advantage, the Bengals offense was in a precarious position. They simply had to do their jobs, moving the football and scoring points. Or at the very least acquire some field position advantage. But at the rate Baltimore's offense was pushing Cincinnati's defense around, like an older brother suplexing his little brother in the living room because he can, field position didn't apply.

On third and two at midfield with 2:51 remaining in the first quarter, BenJarvus Green-Ellis easily converted behind a mauling block from the right side, specifically Andre Smith completely collapsing that side of the line, allowing the Bengals running back to pick up 13 yards.

Armon Binns was a good contributor on the drive, hauling in a contested reception on a hitch route that picked up nine yards. Three plays later Binns picked up another four on a crossing pattern that ended the first half. Eventually Dalton would find himself relying on Jermaine Gresham on third and three from the Ravens 16-yard line to start the second quarter. Dalton faked the handoff and flipped the football slightly over Gresham. A more confident tight end not afraid of being jacked, makes the reception and possible touchdown catch. Instead he kept his arms from reaching out, instead preparing against a jacked up hit from Ray Lewis. Perhaps for the best. Mike Nugent converts a 34-yard field goal.

Cincinnati scores a field goal and somehow it inspires the Ravens offense. Here's the series of plays:

1-10-BLT 18 (14:46): Rice explodes through the line of scrimmage for a 16-yard gain up the middle. Devon Still didn't anticipate the pulling guard, Thomas Howard picked the wrong hole and Ray Maualuga tried dancing with the guard as Ray Rice waved goodbye. Thankfully a shoe-string tackle by Taylor Mays prevented the 82-yard touchdown.

2-9-BLT 35 (13:40): Jacoby Jones is wide right and runs down the right sidelines. Terence Newman stops his coverage to play the ball, poorly timing his jump and allowing an uncovered Jones to run free for the 25-yard gain.

1-10-CIN 40 (13:06): Again the defensive line is blocked, unable to clog lanes or impede any of Rice's progress through the line of scrimmage. Rice would only get six thanks to Thomas Hoard swimming underneath a block.

2-4-CIN34 (12:34): Anquan Boldin lines up in the slot with Nate Clements, playing the role of nickel covering. On the snap Clements blitzes, but the Ravens pick it up. Flacco finds Boldin pressing his advantage over safety Taylor Mays and converts the 34-yard touchdown reception.

Ravens take a 17-3 lead but there's a question if Boldin really caught the football. Former Vice President of Officials Mike Pereira didn't see a touchdown and tweeted, "I looked again at the catch in the endzone and there is no question the ball hit the ground and no question he lost control. Incomplete." Still it was reviewed and confirmed.

Joe Flacco is being presented as a possible elite quarterback Monday morning. Yet a bad pass defense by the Bengals may have been a greater contributor. With 6:45 remaining in the first quarter form the Bengals 19-yard line, Flacco stepped up into the pocket with a pass intended for Dennis Pitta on a five-yard in-route. It was just outside his reach and Thomas Howard momentarily juggled the football before Rey Maualuga came in with a reckless shoulder that knocked Howard and the football down. Incomplete.

With 6:35 remaining in the second quarter, Joe Flacco took the shotgun snap and looked directly at Anquan Boldin's inside route. Rey Maualuga, showing blitz in the A-Gap, released in a dead sprint to cut off the lane between Flacco and Boldin. The football bounced off Maualuga's hands and fell incomplete, though it could have easily been an interception if not a pick-six.

Bengals running back played well in his debut, generating 91 yards rushing on 18 carries for a 5.1 yard/rush average and Cincinnati's only touchdown. More impressively is that Green-Ellis ran the football four times on third (or fourth) down with two yards or less to go. He converted all four with gains of 13, 12, 4 and a six-yard touchdown. 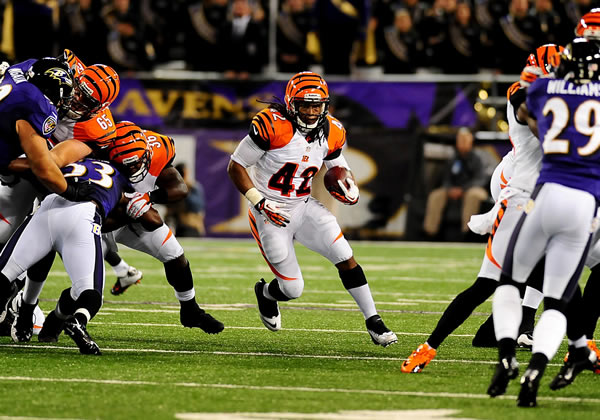 TAYLOR MAYS IS A LIABLILITY

We've been saying since the preseason that Taylor Mays is a liability on this defense. His reckless attacks have injured players, including the Bengals and we're certain that his attempts to detonate people will lead to 15-yard penalties. And that's not including the overall lack of pass coverage; a rather startling deficiency for a safety. It was so bad that we were forced not to talk about it anymore, as a promise to irritated readers who viewed Mays a little more favorably than we did.

Unfortunately here we are. A poor coverage against Anquan Boldin led to a 34-yard touchdown and a foolish helmet-to-helmet hit on Ed Dickson with 8:21 remaining in the second quarter led to a personal foul -- and probably a league fine. Eventually defensive coordinator Mike Zimmer pulled Mays for backup safety Jeromy Miles.

The Ravens won the toss and elected to receive.