With the Cincinnati Bengals announcing that the first home game of the year has sold out, it gloriously means that the local team will play on the tube in the region. Fist pump. For a time Bengals fans unable to make the games didn't have to worry about whether or not the game would be on television, selling out 57 straight (non-preseason) games until the second half of the 2010 season.

Then last year the team failed to sellout all but two games, one being the Steelers which always sells out and the other being a two-for-one special for season-ticket holders during the regular season finale against Baltimore. Cincinnati even failed to sellout their home opener last year against the playoff bound San Francisco 49ers.

Instead this year the entire state of Ohio will get the Bengals/Browns, and most of Kentucky, save for splashes along the southern edge and southwest corner of the state. Other areas getting the Bengals and Browns includes Western West Virginia and pockets of northwestern Pennsylvania. The Bengals will kickoff at 1 PM (Eastern) on CBS.

If you're in the Cincinnati area (and most of the country), the late CBS game will be the New York Jets at Pittsburgh Steelers. The lone Fox game will be the Minnesota Vikings at the Indianapolis Colts.

The map is after the jump (courtesy the506.com). 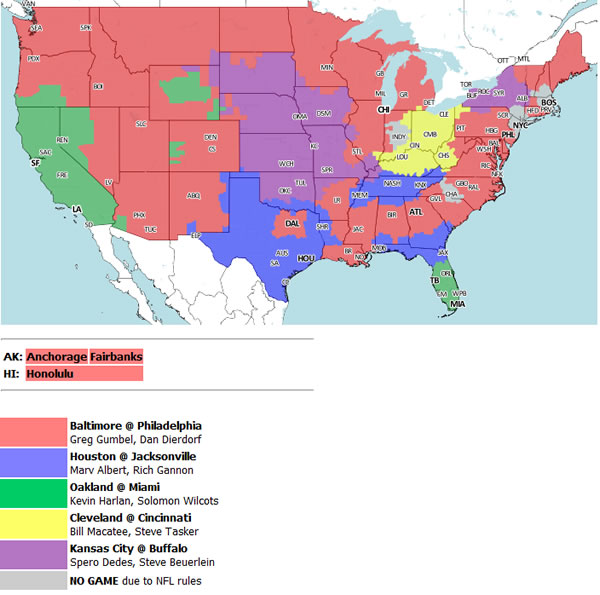