Taylor Mays Fined $21,000 For Unnecessary Roughness (Helmet To Helmet) Hit Against The Ravens

Share All sharing options for: Taylor Mays Fined $21,000 For Unnecessary Roughness (Helmet To Helmet) Hit Against The Ravens

UPDATE: Taylor Mays was fined $21,000 according to Joe Reedy with the Cincinnati Enquirer for "helmet to helmet contact with a defenseless receiver."

Cincinnati Bengals safety Taylor Mays confirmed on Thursday that he received a letter through the mail from the league office, refusing to disclose the amount that an illegal hit on Ed Dickson cost him against the Ravens. With 8:21 remaining in the second quarter and the Ravens holding onto a 17-3 lead from their own 27-yard line, Joe Flacco faked a handoff to Ray Rice and found a wide-open Ed Dickson over the middle running a vertical down the right hash.

Dickson may have heard Mays' footsteps, short-arming the eventual incomplete but taking a shot to the head anyway. Mays was flagged for a personal foul. Fortunately the penalty didn't hurt the Bengals much. Flacco completed consecutive passes for a combined 27 yards following the penalty, but failed to acquire another first down, sacked by Thomas Howard on third down and forced to punt. 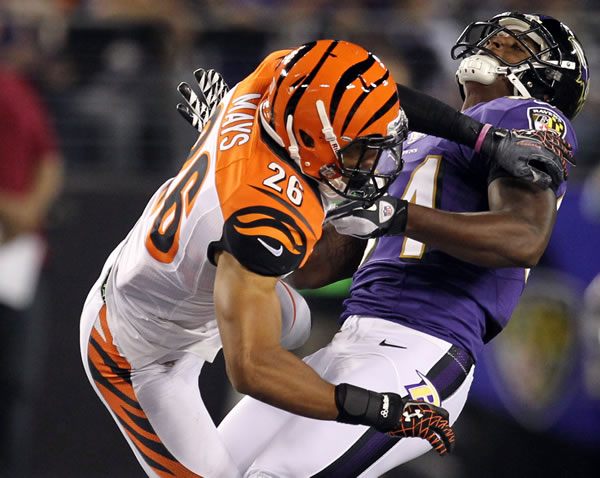 But it was clear that Mays not only launched into Dickson, but their helmets collided.

Dickson celebrated the penalty while Mays looked flabbergasted that his "run head first with massive detonation" play didn't work out as planned.