Remember our glorious high school days when the development stages of a brew-ha-ha forced our wildly masculine grins to stretch out? The jock versus the hood, the Jet versus the greaser, Korben Dallas versus Mr. Zorg. It was always hilarious when a "disagreement" at 11 AM in the morning ended with a time and date on our Outlook calendar that read: 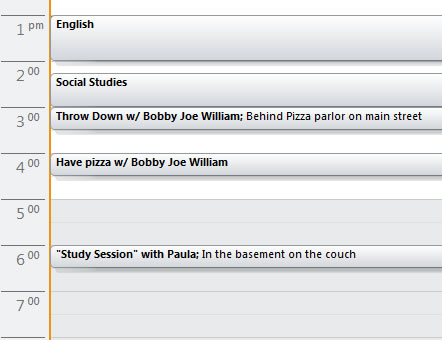 "He can run you over and you can miss a tackle, at the same time, from what we've seen he didn't do nothing spectacular," Maualuga said. "From running screens, missing passes, trying to find a hole when he's running the ball. He just didn't do anything spectacular from what I've seen. I'm pretty sure he's going to want to get after it once he plays us."

Let's spruce up the Battle for Ohio, shall we? Asked about this being on the "mental bulletin board":

"Most definitely,'' Richardson told The Plain Dealer today. "When somebody wants to talk mess, I mean, hey, that's them. I let my game speak for itself, so if they want to see how mad I am, or how upset they got me about the comment, you'll see Sunday.''

Will Richardson try to knock off Maualuga's helmet like he did last week to Coleman, ramming into him on a 9-yard run?

"I might,'' Richardson said with a wry smile. "You never know. You never know what can happen out there on that field.''

We hate to say it but if last Monday is any indication, then Richardson seeking Maualuga might not be unlike driving around for a parking spot at the shopping mall during Christmas season.

Richardson went lamer, with a dash of humility and honest perspective:

"He's right,'' said Richardson. "I haven't done anything yet. Hopefully this weekend I can give him a little flavor of what I'm supposed to come into the NFL with, so I think stuff like that is funny. It's very encouraging.''

This Battle of Ohio is by name a geographical title only. Otherwise this series really needs a spark because it's about as dead as a natural rivalry can be, thanks to the futility of both organizations over the period of 20 years (well, not so long for Browns 2.0).

+ When asked which strong safety they could go with against the Cleveland Browns this Sunday, Marvin Lewis didn't commit to anyone -- though he did began his answer talking about Jeromy Miles. Either way. On my way home I was listening to Bengals roundtable on 700 WLW with Lance McAlister and John Thornton -- a great show -- when a caller complained about Mays, wondering when the last time that the Cincinnati Bengals have had a great safety on the team that could put fear within the minds of offensive players crossing the field.

Taylor Mays has a long way to go for greatness, if he's even capable. But I'll guarantee that the resume he's putting together right now is forcing opposing offensive players to take notice. And despite the 15-yard penalties and injuries to Rey Maualuga and Vontaze Burfict during the preseason, the film he's putting out there as a nuclear hitter is going to be noticed. We're not sure if Mays will ever be a great cover safety. But he's well on his way putting offensive players on notice, especially when crossing over the middle or running verticals routes. Think players won't think twice about stretching out for a reception? Those hits add up.

+ The Bengals injury report from Thursday included a new name. Linebacker Thomas Howard with a knee, who only took part in position drills on Thursday.

+ According to the Baltimore Sun, the Baltimore Ravens win over the Cincinnati Bengals drew 10.9 million viewers, down from 14.6 million during the Monday Night Football opener last year when New England beat Miami 38-24. The game last Monday dropped 23 percent compared to last season with an overnight rating of 8.1.

+ Geoff Hobson with Bengals.com writes about Andrew Hawkins' path, how he almost became a Cleveland Brown and eventual home in Cincinnati.

+ Bengals center Kyle Cook returned to the lockerroom after having a procedure to repair his high ankle sprain. The starting center said that he'll be back by midseason. In the meantime Jeff Faine held his own after only two weeks of preparation against the Ravens defense. All things considered he did just fine.

+ Defensive back Joe Haden won't be playing this weekend against the Bengals, serving a four-game suspension. His first game back will be week six when the Browns host Cincinnati on October 14. Against the Eagles last weekend Haden contributed with 105 total snaps -- 95 on defense and 10 on special teams.

+ Trent Richardson is expecting to improve after a 39-yard rushing performance against the Eagles.

"My expectations are always going to be high," he said. "I always set my goals high and the sky is always the limit as I see it as how good I can be or how good this team can be as a group."

"Just for the record when we’re in here I know we all have a job to do and listen, I only joke with people I admire. I know you guys have a hard job to do so just keep that in mind. I think there’s a time when a little sense of humor helps things. Would you all agree? That being said, this week’s game captain will be Frostee Rucker. I think it’s a good choice and he played for the Bengals, I just don’t want him to peak too soon. I think he’s done a lot of good things since he’s come to town and he’s displayed some of the veteran leadership that you need to see. I appreciate that and our players chose him to be the fourth captain. I think it’s a good choice. Otherwise, it will sound a little bit redundant like it is as you develop a routine to play the next opponent, but its Wednesday. We’re working on base, getting ready to play Cincinnati."