Cincinnati Bengals Coaches Film: When The Passing Game Was Effective

Share All sharing options for: Cincinnati Bengals Coaches Film: When The Passing Game Was Effective

When the Cincinnati Bengals were still within a billion points against the Baltimore Ravens Monday night, they not only employed an effective rushing offense, but employed reasonably effecting passing game through the early moments of the third quarter. A.J. Green moved around the formation finding several match-up problems, largely against linebackers. Successful screen patterns were the result of massive misdirection from those that weren't part of the actual play.

It was a brilliant case of misdirection from the offensive line that limited backside pursuit, compounded by perfection in regards to timing from offensive coordinator Jay Gruden. Dalton faked the handoff to BenJarvus Green-Ellis, heading to the right, which forced Baltimore's linebackers a moment's hesitation. Haloti Ngata, in the B-gap, followed a misdirection block from Clint Boling, who actually pulled away from the play, establishing a stronger facade for Green-Ellis' fake. Inside linebackers Dannell Ellerbe and Ray Lewis bit hard on the misdirection, taking themselves out of the play.

And what's the one play that makes any screen work? Blitzing. Courtney Upshaw, in a three-point stance at defensive end, and safety Bernard Pollard on his outside, both blitzed. 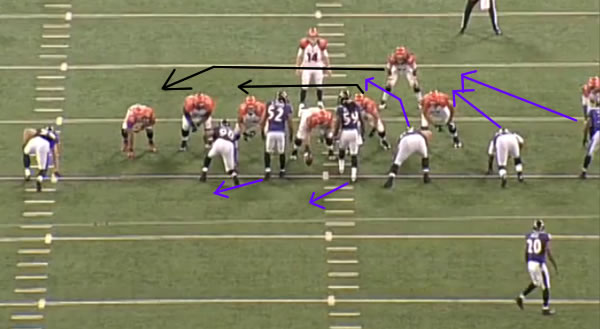 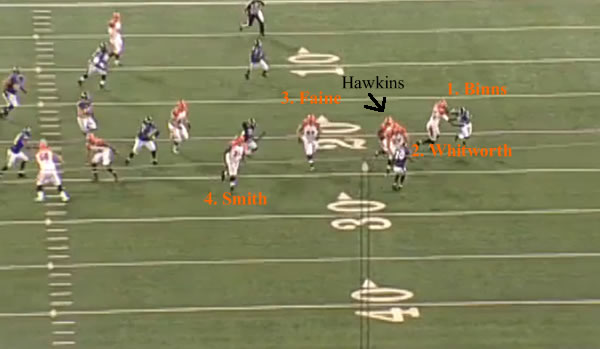 Hawkins angled towards the sidelines while sprinting upfield before he was forced out of bounds during the 27-yard run.

Cincinnati plays an offset-I, strong side to the right with twins on the left. A.J. Green, playing the inside receiver, runs a post around Baltimore's underneath zone coverage (possible Cover Three). 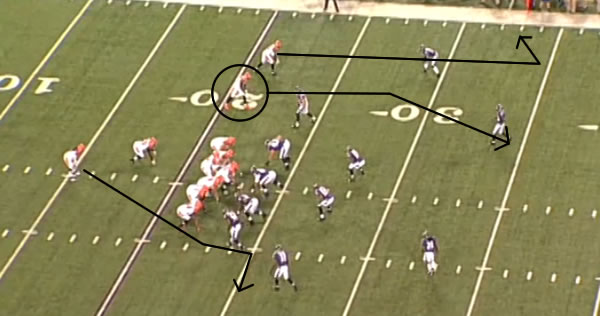 Green pulls in the 19-yard reception, giving Cincinnati a first down at the 42-yard line.

This wasn't a complicated play. Binns, wide left, runs a short hitch with Hawkins, in the left slot, sprinting downfield on a vertical. Baltimore ran a Cover One. A.J. Green, lined up wide right, fires off the line and hints towards the inside momentarily before fading towards the right sidelines (also called a flag route). It turns Jimmy Smith around, generating massive separation. 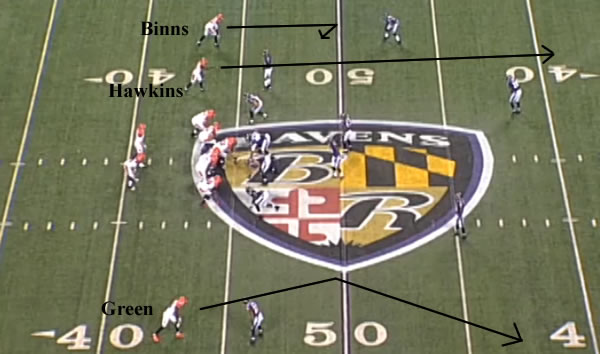 We do have to point one thing out, and this is nothing more than an observation. We don't know what's called or what the coaching staff told Dalton to do on this play, therefore it's unfair for us to blindly criticize someone without having all of the facts. But this appears to be a case of A.J. Green not only being the intended receiver, but we suspect the only progression. In the left slot Andrew Hawkins jukes in before releasing upfield. The move broke him free with Ed Reed over the top but sprinting away to settled in his zone as the Cover One. There's no way Reed would have stopped his progression and made up the ground against the speedy Hawkins. 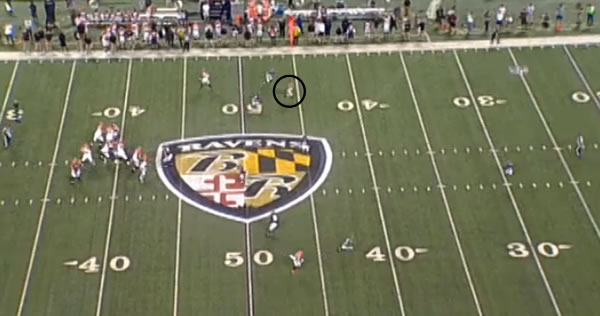 Now by the time Hawkins departed the land of the covered, Dalton was already in his motion to throw the football. Waiting a second longer and this very well could have been a 55-yard touchdown pass. Another quick observation is that when Hawkins was breaking free, he took both underneath defenders leaving Armon Binns wide open and completely alone underneath.

Baltimore couldn't have drawn up a poorer coverage scheme (or executed it worse) than what they called during Green's 17-yard reception.

The Baltimore Ravens called a Cover Two Man, with both linebackers tracking Jermaine Gresham's vertical and Orson Charles, in a two-point stance outside of Gresham, five-yard out. Green-Ellis, flanked wide right, and Armon Binns, wide left, run a vertical. 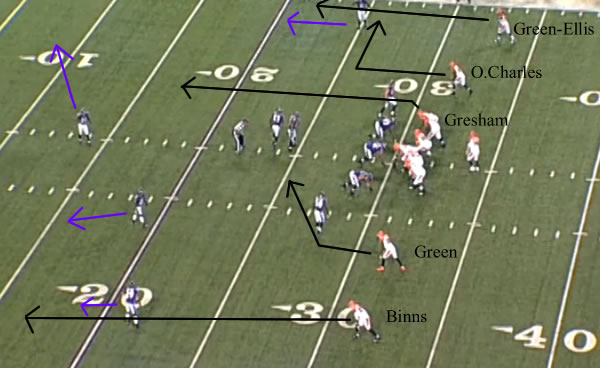 The formation also presented a serious mismatch to the point that Baltimore could have called a timeout. They didn't. Instead allowed linebacker Albert McClellan to cover A.J. Green in the slot on the left. And we're fairly sure that Andy Dalton noticed, changing the play at the line of scrimmage. Green initially faked out and the not-so-nimble McClellan bit hard enough to lose traction and allow at least 2-3 yards of separation between the two.

McClellan eventually made the stop, largely because the pass was slightly off-target forcing Green to slow-up. The Bengals picked up 17 yards on the play, well within the red zone within the two minute warning.