Share All sharing options for: How The Cleveland Browns Scored Big Plays Against The Cincinnati Bengals Defense

Brandon Weeden had moments on Sunday that it was clear, he was well on his way to a Hall of Fame enshrinement ceremony against the Cincinnati Bengals defense. With 7:18 remaining in the fourth quarter, the Bengals leading 31-17, the Browns offense responded to a Bengals score reducing Cincinnati's lead to seven.

On Cincinnati's 24-yard line, the Browns assault the Bengals secondary.

Greg Little, lined up wide right, faced a momentary challenge by Nate Clements, who was in zone coverage. Eventually Little was allowed to release upfield while the Bengals pass rush meandered around Weeden's perfect pocket. Little caught the touchdown pass, bringing Cleveland's deficit to within seven.

Suppose my question is this: What the hell is Jeromy Miles doing?

Instead of trying to hit Little into an incomplete pass, or at the very least prevent the touchdown, Miles reacted as if there were no receiver, going for the reception behind Little.

That's the type of play you kind of need someone like Taylor Mays, head-hunting an open receiver to knock the football out of his secure hands.

With twenty seconds remaining in the third quarter and the Bengals leading 24-10, Brandon Weeden goes through his progressions before checking down to running back Trent Richardson swinging out of the backfield. Richardson went on to make the Bengals defense look like a division III high school team.

First Leon Hall slide off Richardson and Rey Maualuga was tricked by the time-tested move of running straight.

Maualuga clipped a trailing Vontaze Burfict, who was pass rushing on the play but retreated when Weeden unloaded the football. After getting through the first two tackles, Richardson easily deflected Jeromy Miles' tackle low. 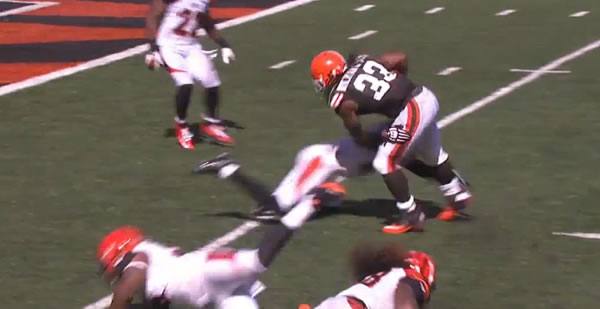 Nate Clements became the fourth victim on Richardson's version of a Michael Jordan poster, but instead of tackling the running back, he went for the football. All things considered, it might have been as effective as another missed tackle.

Now the score is 31-24 heading into the fourth quarter.

With 8:15 remaining in the second quarter from Cincinnati's 32-yard line, the Browns call a Trent Richardson draw with the Bengals leading 14-3. Rey Maualuga, having taken his first step backwards anticipating the pass (what the draw typically does to a defense expecting pass), prepares to take on the block from center Alex Mack. 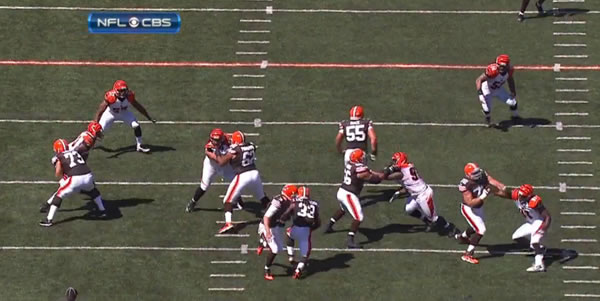 The two players collide, but Maualuga keeps an eye on Richardson's projected direction.

When the running back eventually declares, Maualuga ditches Mack and loads up for a punishing hit, limiting the overall gain by Richardson. 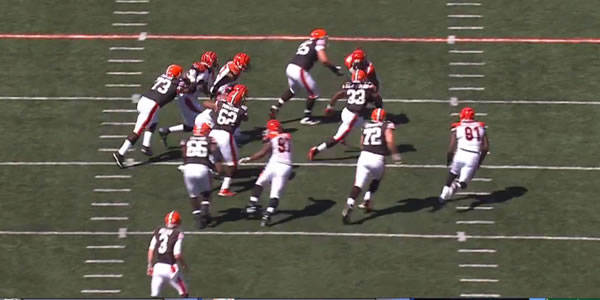 Except he missed. Richardson does what Maualuga least expected. He runs to the right.

With terrible angles from Jeromy Miles and Nate Clements and Robert Geathers unable to track down Richardson from behind, the Browns running back is gone, scoring on the 32-yard touchdown run.

The Maualuga miss earlier during the play is essentially the issue we've noticed from the linebacker this year, perhaps during his entire tenure in the middle. He tends to receive blocks, or waits for things to come to him. Often the result is bad.

Now my trade isn't a professional linebacker in the NFL, but I've seen some of the better linebackers play over the past 30 years. And what made them so good wasn't that they received blocks or waited for the ball carrier. It's that they aggressively attacked, bringing the hurt to the back rather than the back bringing the embarrassment to the linebacker.

Less than two minutes remain in the game and the Cleveland Browns, down by ten points, are driving needing two scores. Eventually they'll score a field goal and attempt an onside, but fail to convert allowing Cincinnati to take a knee and win the game. But with 1:41 remaining on Cincinnati's 48-yard line, Brandon Weeden takes the snap and slings the football over the middle to Benjamin Watson, who ran upfield.

Look at Rey Maualuga, colliding with Watson that will undoubtedly end with a sure-tackle. 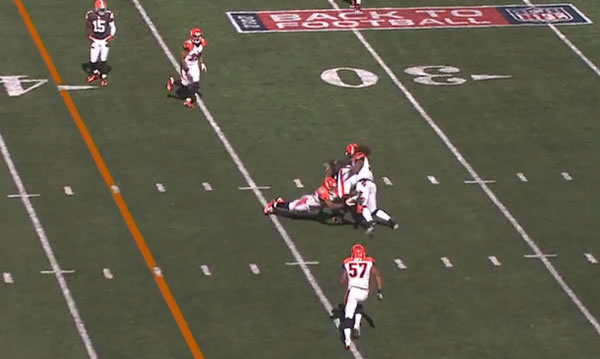 Except not. In fact Watson spun, shedding Maualuga and Nate Clements' tackle.

It took five Bengals defenders to finally stop Watson's 27-yard reception, with Maualuga and Terence Newman jogging into the frame towards the end. 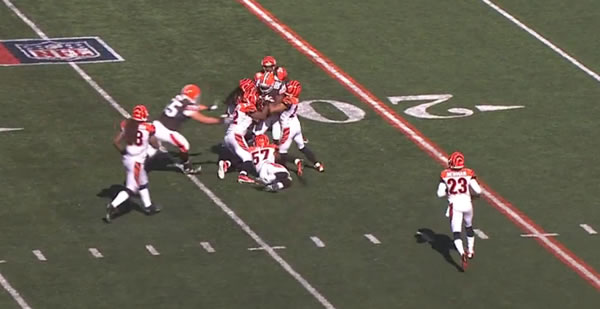 While Cincinnati's offense and special teams scored 34 points, winning the game, the Bengals defense, projected as a top-ten defense, gave up 439 yards to the Cleveland Browns on Sunday, including an average 7.1 yards/play.

If the Bengals are going to be worth a damn this year, this defense has to improve or the offense is going to be forced into a shootout every weekend. And while we like what most of the offensive players bring to the table, they're not designed as a unit to score 30 points every weekend. In fact the game dramatically changes if not for Adam Jones' punt return for touchdown. The offense will need help on defense. They'll need Rey Maualuga to step up and someone worthwhile at strong safety.