The Cincinnati Bengals Pass Protection Against The Cleveland Browns

Share All sharing options for: The Cincinnati Bengals Pass Protection Against The Cleveland Browns

Though Bengals quarterback Andy Dalton had a career-like performance during Cincinnati's 34-27 win over the Cleveland Browns, he was also under intense pressure. Along with six quarterback sacks, Dalton was hit an additional six times that didn't result in a sack. Not all of them was the fault of the offensive line.

For example with 6:08 remaining in the first quarter, Dalton was tackled at the line of scrimmage after having no open receivers. While technically a quarterback sack, we're not going to detail the play because it wasn't necessarily the result of poor pass protection. Same applies to the quarterback sack with 13:34 remaining in the second quarter. Dalton faked the handoff to BenJarvus Green-Ellis out of shotgun, tried hitting A.J. Green to the right. But once the route was cutoff, Dalton immediately tucked the football and ran. It wasn't so much bad pass protection, as it was the appearance that Andy Dalton wasn't quite sure about the next progression.

But some were on the offensive line.

With 7:34 remaining in the first quarter, Andy Dalton takes the shotgun snap from the Bengals 18-yard line on second and two.

Andrew Whitworth takes on defensive end Juqua Parker while BenJarvus Green-Ellis checks the middle for blitzers before departing into his route. 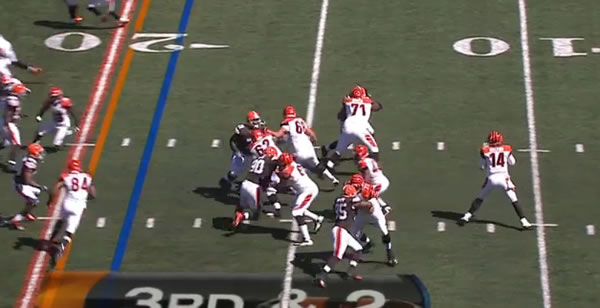 Parker begins working Whitworth, who started leaning and losing his balance. Eventually Parker shifted around Whitworth, who made one last ditch effort to stopping Parker by taking his head off. 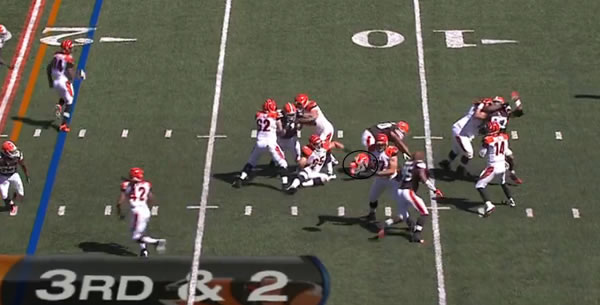 Dalton shifted up into the pocket from Jabaal Sheard's pass rush to Dalton's right; a battle that Andre Smith nearly lost. Clint Boling also lost his battle with Billy Winn, who spun around the offensive guard closing the inside rush, but momentarily out of harm's way after losing his balance. By this time Parker had already broken free from Whitworth to generate the quarterback sack. Thankfully D'Qwell Jackson was called for unnecessary roughness, giving the Bengals a new set of downs.

Though we have to admit the penalty on Jackson was a bit ridiculous. He hit Jermaine Gresham during his route, knocking the tight end to the ground while the play was very much alive. At best it was illegal contact, but the hit wasn't the Hines Ward blindside as might be suspected. 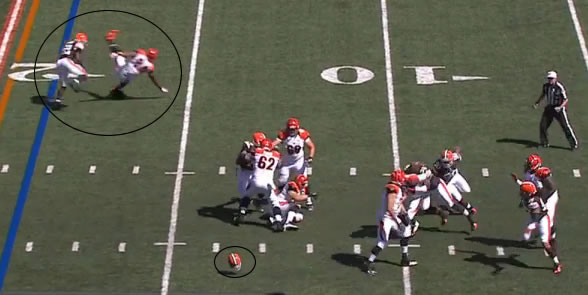 With 13:55 remaining in the third quarter from the Bengals 33-yard line, Dalton fakes the handoff to Green-Ellis and then slides to the right. 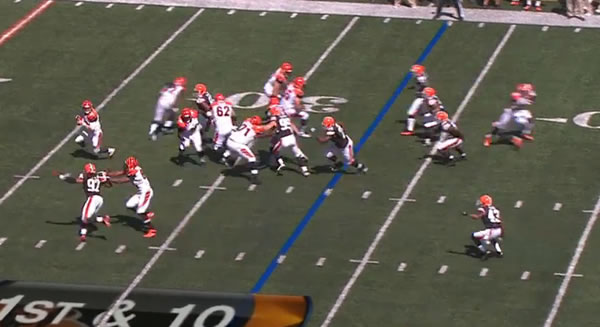 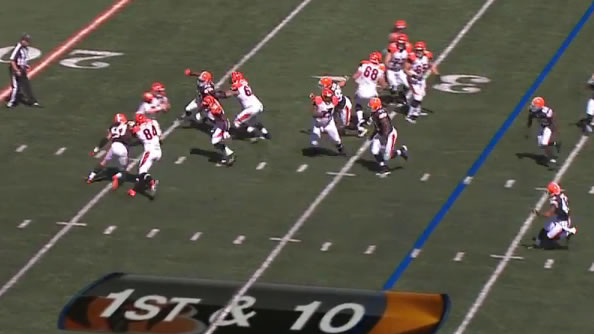 Dalton stepped up into the pocket to avoid the pass rush on both edges while a handful of blockers to stand off to the side watching the play deteriorate. Seriously? 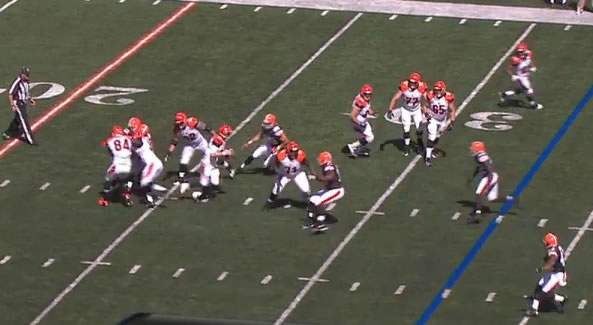 Let's just call this a poor play design and be done with it.

With 12:15 remaining in the final period, Dalton takes the snap at midfield on first down. Defensive end Frostee Rucker lined up outside Andrew Whitworth, taking an inside stunt. Whitworth pushed Rucker into Clint Boling, who immediately lost position with Rucker breaking through for the ten-yard loss on Dalton.

It wasn't neccessarily the best performance from the offensive line pass blocking. When it's all said and done, they'll be knocked for the six quarterback sacks, despite the fact they weren't all necessarily their fault.