Naturally a win is cause enough for one to celebrate. And we're sure that there were plenty of tasty Coors Lights being downed in the process of said worthy victory. Two areas for our Monday morning/afternoon celebration that we wanted to touch on is Cincinnati's biggest plays from their 34-27 win over the Cleveland Browns.

The first comes with 12:05 remaining in the third quarter. It wasn't an entirely impressive first possession of the second half for Cincinnati's offense. BenJarvus Green-Ellis picked up a handful of yards on a couple of carries and A.J. Green caught a 10-yard pass from Andy Dalton, who was sacked at some point during the possession.

Eventually the Bengals have third down and six at Cleveland's 44-yard line. Cleveland played Cover One Man, blitzing someone inside. Defensive back Eric Hagg lined up outside on Brandon Tate, flanking wide right.

Tate approached the Browns defensive back, taking a disco slide step to the right and Usain Bolt'ing Eric Hagg down the right sidelines. 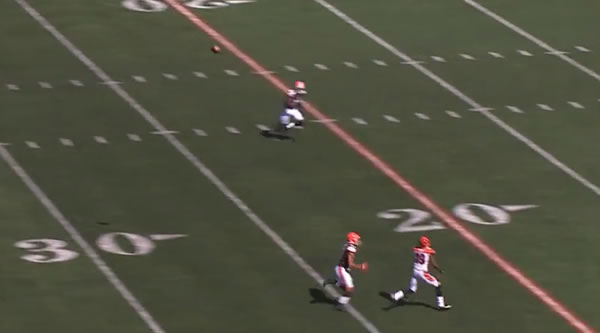 Nothing spectacular, other than recognition by Andy Dalton that he had a superior matchup advantage on the outside. The 44-yard touchdown gave the Bengals a 24-10 lead early in the third quarter. Considering that the Cleveland Browns responded to virtually every Bengals score, it was a big play that helped shift some momentum for the Bengals -- until the Bengals defense picked up said momentum with a confused look, handed it to the Browns offense and said, "lose this?"

Our second play, or reason to celebrate was much later in the game when those Coors Lights start redefining someone's perception of another's DNA structure.

There's 11:01 remaining in the game on third and ten from midfield. The Bengals are holding onto a seven-point lead when Andy Dalton is forced to rollout to the right. But first the formations. 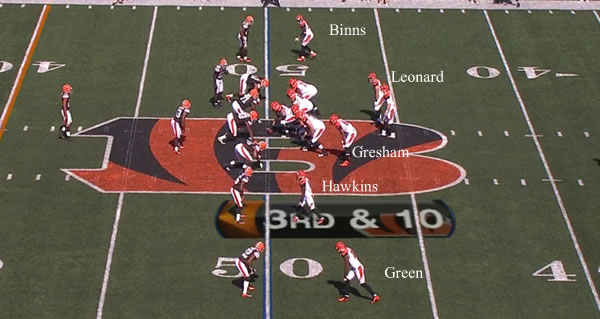 Defensive lineman Ahtyba Rubin breaks free from a Kevin Zeitler block, forcing Dalton to rollout to his right. Looking. Looking. Looking. Andrew Hawkins, in the slot on the left, comes across the field, making himself available for the troubled second-year quarterback. Dalton noticed, flings the football to Hawkins, who catches the football at the Cleveland 40-yard line.

And then. Well. Let's watch.

Let's not disregard the great efforts by Brian Leonard and A.J. Green, giving Hawkins his lanes downfield to break free for the 50-yard touchdown reception. That's all effort, wanting to help the team score a touchdown to take a two-score lead.

There's no one on this team, perhaps in this league, that can make the things that Hawkins does in open space.