Bengals Defensive Coordinator Mike Zimmer: "I'm Not Going To Stand Pat For This"

Share All sharing options for: Bengals Defensive Coordinator Mike Zimmer: "I'm Not Going To Stand Pat For This"

"I'm not going to stand pat for this."

Could there be a hint at a lineup changes, as local beat writers are suggesting? In two games the Cincinnati Bengals defense has allowed 839 combined yards to the Baltimore Ravens and Cleveland Browns, games where one would assume a measure of pride when facing intra-divisional rivals. Of the 24 third down opportunities by Cincinnati's opponents, the Ravens and Browns have converted 10 combined -- ranked 20th in the NFL before the Monday Night Football game between the Falcons and Broncos.

Opposing quarterbacks Joe Flacco and Branden Weeden have completed a combined 49 of 69 passes for a passing completion rate of 71.0 percent -- 29th in the NFL. The average yards gained by the opposing rushing offense is a combined 5.5 yards/rush. 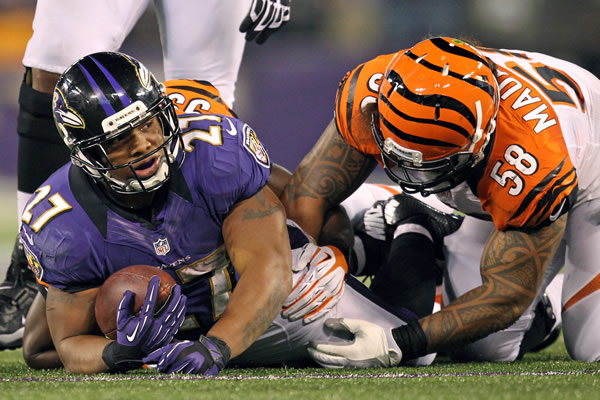 Despite generating five quarterback sacks, tied for ninth-most in the NFL right now, the times when the Bengals aren't sacking the quarterback, they aren't generating much of a pass rush at all.

As for the hint of about there being lineup changes, we're curious where. Taylor Mays has already been replaced by Jeromy Miles as the starting strong safety, who was a huge contributor during Cleveland's bigger gains last Sunday. Adam Jones and Terence Newman could factor more playing time at corner, or Clements could make the complete transformation as a safety. But those are trivialities because most of those players swap responsibilities anyway -- and does it even matter who starts anyway? 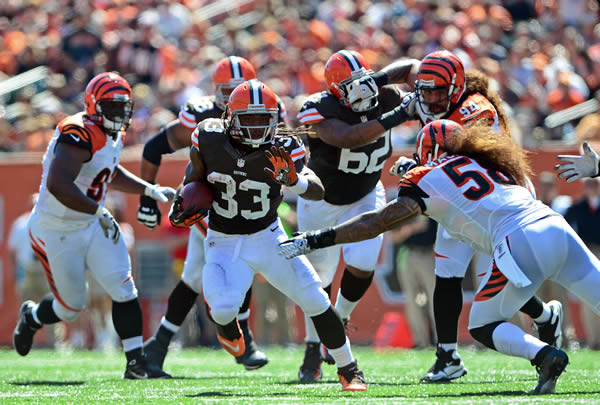 The one spot we think could have the biggest impact, a spot that Mike Zimmer could be hinting at is middle linebacker. Through two games Rey Maualuga has struggled, taking direct blame (fairly or not) for most of Cincinnati's disappointing decline on defense. Even though he posted a team-high 10 tackles against the Browns, we have a feeling that if there were a chart for missed tackles laying around somewhere, he could be near the top.

Vontaze Burfict, who took part on 22 snaps, mostly as the weakside linebacker, posted three tackles but Vinny Rey had perhaps the most impressive outing on Sunday. With 46 snaps on defense Rey generated six tackles, a quarterback sack and another hit on the quarterback that didn't result in a sack. We figure that Roddrick Muckelroy, who went on a walk-about for a few weeks returning last Friday, will get defensive playing time this weekend against the Washington Redskins. He was a monster during 10 special teams snaps against the Browns.

However the Bengals decide to change the lineup this weekend, they have no choice but to improve. Because this offense isn't designed as a high-power offense, rather a ball control unit that takes their shots downfield. And if Mike Zimmer can't find that thread to generate some emotion and aggression we've been used to seeing, this season won't last very long. Or it could be a very long season. Whatever. It means the same. 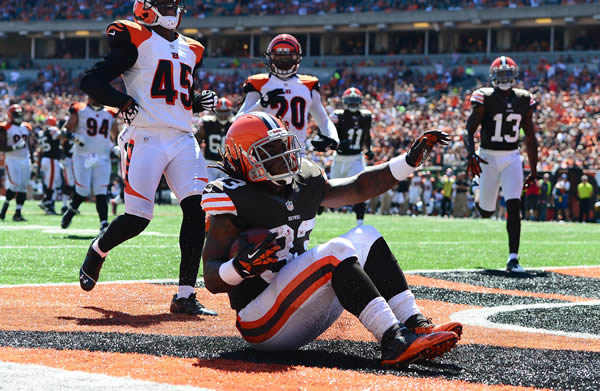 "You can't win many football games in the National Football League when you give up whatever we gave up in points yesterday (27)," said head coach Marvin Lewis. "I know that for a fact. It's difficult to score as many as we scored. You have to play better on defense and you can't give up explosive plays like we did. The six explosive plays we gave up yesterday, you can't give those plays up – the run and five (plays) in the passing game like that. You're going to put yourself behind a lot. You've got to play better on third-down defense and third-down offense, in order to do it. It comes back to the same things all the time."