Television Coverage For Bengals/Redskins And Other Games In Cincinnati Region

Share All sharing options for: Television Coverage For Bengals/Redskins And Other Games In Cincinnati Region

If you're eagerly anticipating Cincinnati's week three meeting against the Washington Redskins, then you might need to become a drunken fly to understand the coverage that this game is receiving. The Washington region is obvious, with scattered locations around the states from Ohio to Pennsylvania to South Carolina. There's Texas, Arizona, New Mexico, portions of the northwest. Most of the state of Ohio, largely outside of the Cincinnati and Dayton areas, will be forced into the Buffalo Bills and Cleveland Browns. Ouch.

Most of the country is receiving Kansas City and New Orleans as the early CBS game. In the Cincinnati region we're getting two late games, with the Pittsburgh Steelers and Oakland Raiders on CBS and the Philadelphia Eagles at Arizona Cardinals on Fox.

Now what you really care about. The regional map for the Cincinnati Bengals Sunday afternoon. 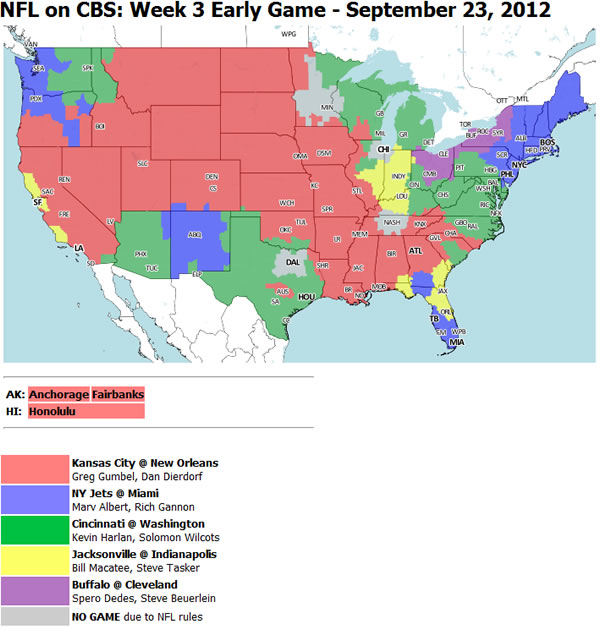