Even knowing about the quality of someone's character, they somehow to surprise you. And it's always Cincinnati Bengals wide receiver A.J. Green, who is such a dramatic change from the recent receivers that this team has had.

Case in point. Green added another entry at Made Man, talking about a variety of topics from being hit by defensive players, the league's dependence on the passing game and rule changes. But there's one aspect of the entry that simply reminds you how awesome it is to have someone like Green on this team.

We’ve been using all our receivers—six guys caught passes in our win over the Browns. I feel good that all our guys are getting involved. Andy is spreading the targets and we have confidence in our group to make the play. It’s good for me because they may not double me as much, but if that does happen, and it opens up routes for my teammates, it’s all good. I don’t worry about stats. My number will get called as the season goes on—stuff will start opening up more for me.

If you watch Andrew Hawkins' 50-yard touchdown against the Browns, the final block issued by the Bengalso offense was A.J. Green's towards the end of the run. 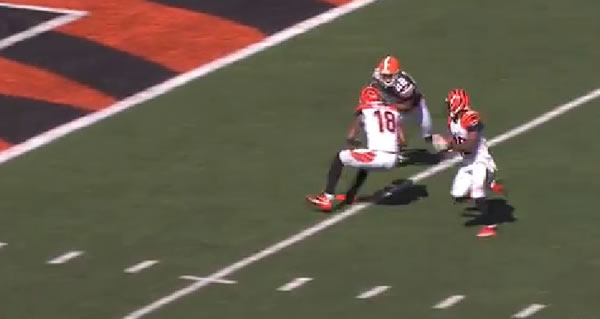 Green concludes his blog entry giving a shoutout "to Bengal Nation—we’re all working hard to bring success and a Super Bowl title to the City."