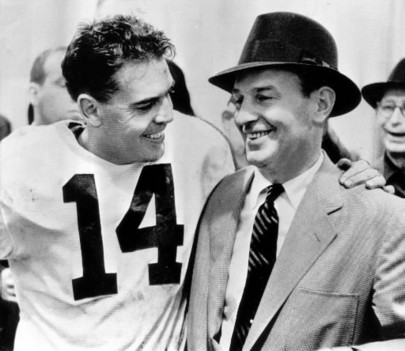 Before becoming a legendary head coach, Paul Brown graduated high school and tried making the Ohio State Buckeyes as a quarterback. He didn't. So after his freshman year, he transfered to Miami University to study pre-law and history on a Rhodes Scholarship but also started two seasons and compiled a 14-3 career record. He was even named to the All-Ohio small-school second team in 1928 by the Associated Press.

After his playing career concluded, Brown would make the decision to coach, becoming a legendary high school coach at Massillion Washington (where he went to school), then the NFL with the Cleveland Browns and the owner of the Cincinnati Bengals with stops at Severn high school, Ohio State and the Great Lakes Blue Jackets.

But for a brief time he played football before coaching. Miami Unversity unveiled Paul Brown's statue on Saturday, becoming the ninth satue in the "Cradle of Coaches" plaza. His son Mike, current owner and President of the Cincinnati Bengals, reflects.

"My father was always proud of his ties to Miami, as a student and athlete and later as a trustee of the university," Bengals president Mike Brown said in a statement Friday. "It always had a special place in his heart. It would have pleased him to be honored in this way, tied in to the tradition of Miami football."