Cincinnati Bengals defensive end Michael Johnson posted a career-game against the Washington Redskins on Sunday as a pass rusher.

Share All sharing options for: Bengals Defensive End Michael Johnson And His Career Performance Against The Redskins

Michael Johnson's performance against the Washington Redskins Sunday afternoon was arguably the best in his young NFL career. Entering Sunday's game against the Washington Redskins, Johnson has only generated 12.5 quarterback sacks in 47 career regular season games. After Cincinnati's 38-31 win over the Redskins, his career sack total increased by 24 percent, upping his total to 15.5. And it wasn't just the sacks. He generated a team-high seven quarterback hits, a pass deflection, six total tackles as a general nemesis for Redskins rookie quarterback Robert Griffin III.

After the game a returning Carlos Dunlap, who may have helped free Johnson on many pass rushes, said of Michael Johnson's performance:

"When (RG III) goes to the bathroom tonight he's going to see Mike Johnson right behind him."

Now in fairness we have to point out that his performance wasn't against Washington's starting left tackle, Trent Williams, who left the game early with a knee injury. So if you want compare Johnson's performance to that of Antwan Odom, who generated five quarterbacks sacks in 2009 against a backup offensive lineman for the Green Bay Packers, go ahead.

But first a strong effort against Washington's running early rushing performance. With 6:36 remaining in the first quarter from Washington's own 10-yard line, quarterback Robert Griffin III hands off to Alfred Morris targeting the left side of the offensive line. Johnson clearly overpowers left tackle Jordan Black, who replaced the injured Trent Williams, three yards deep into the backfield. It wasn't a straight bull-rush either. Johnson was in control the entire time.

Johnson shed off Black's attempted block and dropped Morris for a limited three-yard gain. The Bengals defense forced a three and out during the possession after Griffin threw an incomplete to Leonard Hankerson near the right sidelines.

By the 3:28 mark in the first quarter, the Bengals have secured a 14-7 lead when the Redskins take possession at their own 20-yard line. Following an 11-yard screen to Joshua Morgan, Griffin fakes the handoff to Morris with 2:52 in the first. Michael Johnson began with a bee-line down the line of scrimmage before redirecting into a pass rush once he realized Griffin held onto the football. The secondary really dominated this play, forcing the rookie quarterback to hold onto the football.

Wallace Gilberry split a double team, forcing Griffin to step into the pocket. By this time Johnson's spin move shredded Logan Paulsen's block, who pulled from the right during the run fake, opening a lane for the defensive end. 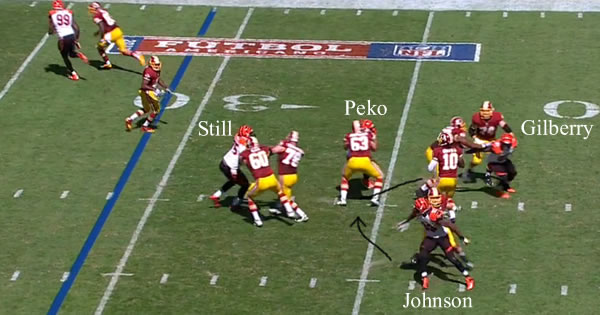 On the following play, with 2:15 remaining in the first quarter from Washington's 27-yard line, Johnson performed the oldest pass rush move in the book against Jordan Black. Sprint past the blocker. 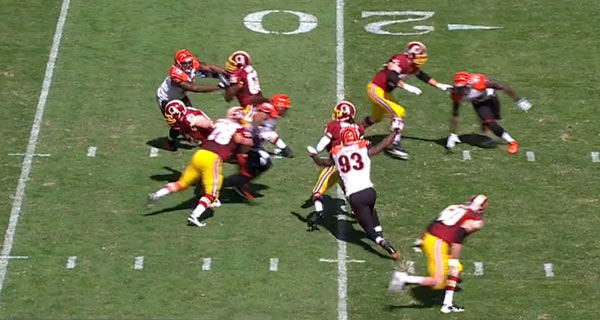 Boom. Perhaps one of the hardest hits Griffin has felt in his three-game NFL career.

BenJarvus Green-Ellis had just committed his first fumble in his NFL career late in the third quarter, on the first possession after the Washington Redskins tied the game at 24. To say that momentum wasn't on Cincinnati's side would be an understatement. After Vontaze Burfict forced Brandon Banks to choose the linebacker or sidelines during a pitchout on first down from the Bengals 47-yard line (Banks choose linebacker and didn't gain a yard), the Redskins have second down with 2:28 remaining in the third.

Griffin faked the handoff to Morris and leaned to the right side of the pocket. Michael Johnson, after a sweet swim move over Jordan Black, beat TWO more Redskins offensive linemen, all whom observed Johnson record his third quarterback sack of the afternoon.

Despite not always generating a quarterback sack, Michael Johnson got his shots in. With 13:18 remaining in the third quarter, Johnson drills Griffin just as the quarterback released the football.

Unfortunately it didn't affect the throw; a 12-yard completion to Fred Davis. With 4:08 remaining in the fourth quarter, Johnson beat Black's block and hit Griffin a millisecond after the quarterback released the football. 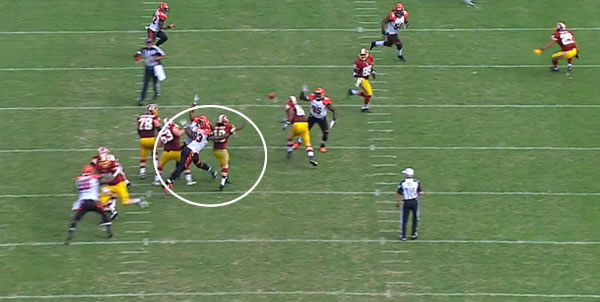 And if he's not hitting people, he's deflecting footballs. With 9:28 remaining in the fourth quarter, Johnson hovers around the line of scrimmage watching the quarterback make his progressions. As Griffin cocked and loaded a throw, Johnson stepped into a passing lane and deflected the football as it breached the line of scrimmage.