While rewatching Cincinnati's win on NFL.com's awesome Game Rewind service, we wanted to take a moment to observe the Pick-Six that Andy Dalton threw early in the first quarter. At first glance it just looked like a terrible decision, but you figured it was more than that while watching the football travel through the air like an uncontrolled punt. Yet it tied the game at seven, somewhat neutralizing an exciting 73-yard pass thrown by wide receiver Mohamed Sanu that set the stage for Jay Gruden's "throw the kitchen sink at Washington's defense" philosophy on Sunday.

So let's take a moment to see how the play broke down and led to a pick-six.

Now the Redskins punted the football to Cincinnati's two-yard line with over 11 minutes remaining in the first quarter. The Bengals tried acquiring some breathing room with a power run up the gut, but the Redskins were waiting, limiting BenJarvus Green-Ellis' run to only a yard. If that. So Jay Gruden called a pass in Cincinnati's endzone and it turned into a disaster.

There's a reason we're point out Ryan Kerrigan. And the key to Andy Dalton's pick-six is that no one in Cincinnati's pass protection scheme was assigned Washington's best pass rusher. Jermaine Gresham left for a route and Chris Pressley focused on the outer-most rusher, a blitzing safety in DeJon Gomes. Andre Smith took on defensive end Jarvis Jenkins. Kevin Zeitler and Jeff Faine took on nose tackle Barry Cofield.

The result leaves an open pass rusher without an assigned blocker. Now as observers we're obviously not players or coaches but it would appear to us that Pressley should have gone with the inside rusher in Kerrigan, whose eyes widen with a free shot on Andy Dalton. 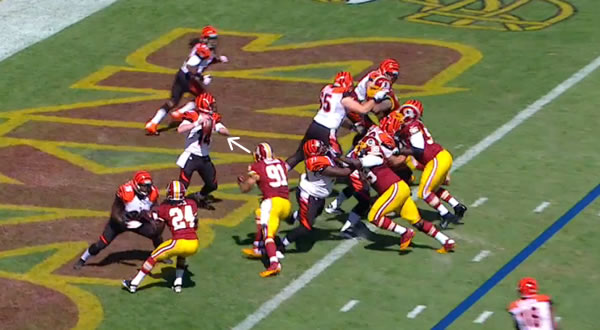 Instead of guiding BenJarvus Green-Ellis out of the endzone, the hit from Kerrigan changes the football's trajectory well in front of Green-Ellis where linebacker Rob Jackson made a one-handed interception and rolled into the endzone for the game-tying touchdown.

Perhaps there was a missed assignment or a communication error that would have shifted the blocking scheme to account for the blitzing safety, who obviously took Pressley's attention. We'll never know. But if you're going to call a passing play deep in your own endzone, you better account for the opponent's best pass rusher.