Much like we did featuring Armon Binns' first career touchdown, giving the wide receiver his own post celebrating a major milestone in his life, we're going to spend a moment to celebrate another milestone for a Cincinnati Bengals player. Drafted in the fourth round of the 2012 NFL draft, tight end Orson Charles posted his first career reception on Sunday against the Washington Redskins.

With the scored at 24 and 12:42 remaining in fourth quarter, the Bengals setup shop on their own 31-yard line following an 11-yard reception from A.J. Green.

Tight end Orson Charles lines up as the right tight end while Jermaine Gresham stands in a two-point stance covering the C-gap between Andre Smith and the (about-to-be) departed Charles, who runs a seam down the middle. Washington rushes five. Unfortunately for Gresham, he gets buried alive by a Ryan Kerrigan bull-rush. Dalton is forced to get rid of it before Washington's best pass rusher drops Cincinnati's quarterback.

The fact he was able to get rid of the football was impressive enough. But before the hit, Dalton scanned the field, looking to his left and then middle, perhaps manipulating the coverage, intending to hit Charles no matter what. Just before Kerrigan's diving body crashes into Dalton, the quarterback unleashes a prayer to Charles, with London Fletcher and Madieu Williams flanking him. 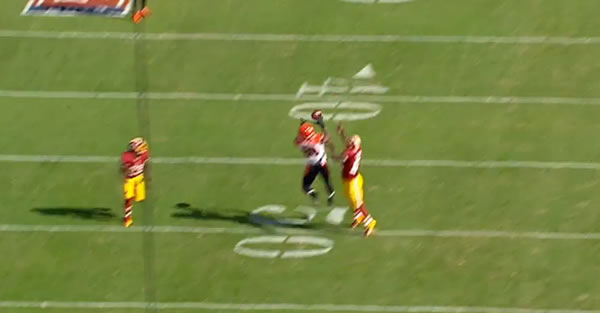 Sorry for the blurry images -- couldn't get a clear shot.

The 22-yard gain pushed Cincinnati to Washington's side of the field and three plays later, the Bengals took a 31-24 lead never looking back for the rest of the game. 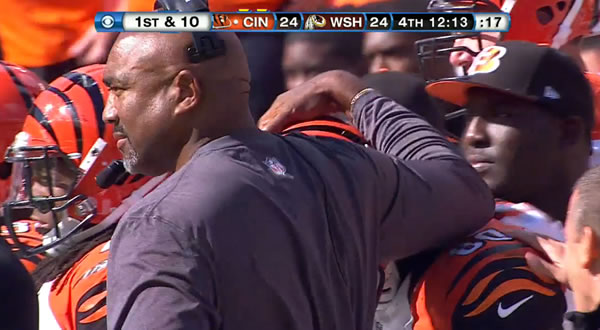 Welcome to the NFL kid.