Rey Maualuga And The Cincinnati Bengals Defense Continues To Struggle

The Cincinnati Bengals defense is struggling, there's no debate about that. We take a look at a handful of players during Cincinnati's 38-31 win over the Washington Redskins.

Share All sharing options for: Rey Maualuga And The Cincinnati Bengals Defense Continues To Struggle

If one were to blindly rely at the statistics following Cincinnati's win over the Washington Redskins, one might be inclined to promote a theory that middle linebacker Rey Maualuga played a great game. He generated a team-leading 13 tackles, including seven solo tackles which tied Reggie Nelson for the team lead. Fantastic. Great game.

Maybe not. But that's the craze today. Beat up on Rey Maualuga and praise the defensive pass rush. Though Michael Johnson had a career-game as a pass rusher against Washington, something we promoted earlier on Monday, high school coaches could use his performance on Sunday as an example on how one should never play the option. Johnson routinely crashed the defensive line on fakes to the running back, allowing Robert Griffin III and a pitchman (often Brandon Banks) to run unopposed because only one defender typically remained to either hit the quarterback or take the pitch. And generally speaking a good option is usually the result opposite of what the lone defensive player chooses.

But it's not all Maualuga or Johnson's production against the option. Is the lack of fear Washington had running between the tackles. There was a reason defensive players crashed so hard when believing that Morris had the football. If not for being dominated on the block and losing their assignments, Bengals defenders were missing tackles or simply not aggressive enough to limit a gain. Maualuga may have had 13 tackles, but how many were 5-10 yards beyond the line of scrimmage?

It's also the pass coverage schemes that's leaving massive gaps over the middle, especially 10-15 yards deep where two inside linebackers naturally drift apart. How many receptions were behind Maualuga, Vontaze Burfict or Vinny Ray with Robert Griffin III splitting players with a fastball, notably to tight end Fred Davis?

We really don't want to pile on the Rey Maualuga is struggling file either -- though it's far too noticeable to avoid. Yet it really is an entire defense on the lam. The caveat of Cincinnati's pass rush, especially from Carlos Dunlap and Michael Johnson are noted, and featured on these pages. But if one were to really dig into the problems facing this defense, it's that they're slow to react, timid to respond and lacking the crucial instincts that made this defense a top-ten unit last year.

We took a look at a series of plays in the second half.

When judging Rey Maualuga we avoided outside runs, largely because that's not an assignment issue or technically his responsibility. Granted we'd love to see him sprinting coast to coast with a dominating attitude, but we're not getting that. We won't get that and we're no longer expecting a top-15 middle linebacker in the NFL. Depressing. Either way we're going to focus more on inside runs as well as the passes over the middle.

Opening the second half the Redskins looked to expose Cincinnati's coverage schemes over the middle. Linebackers drift away from each other at an angle, opening a significant gap over the middle.

It allowed Fred Davis to generating 26 yards receiving on two receptions, including a 14-yard gain that converted a third and five with 13:53 remaining. This was open all day and has been available to opposing offenses all season.

On first and ten from the Bengals 49-yard line, Robert Griffin III hands off to running back Evan Royster over the middle, while carrying out his triple-option without the football. Maualuga was in perfect position but hesitated with Griffin and Brandon Banks running right, as if they were carrying out the option. It was only a momentary pause, but long enough for offensive tackle Tyler Polumbus to lock into the middle linebacker.

Maualuga would eventually take part in the tackle, but not after Evan Royster picked up nine. Again. Maualuga generated 13 tackles but how many were five yards or more beyond the line of scrimmage.

On the following play Alfred Morris gains five yards up the middle. Maualuga spied while Devon Still was dominated by a double-team. Morris made an initial cut to the left, redirecting right once he noticed Adam Jones crashing inside. The move threw a wrench in Maualuga's attack. 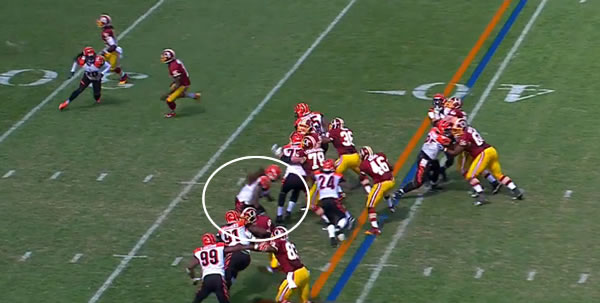 Morris gained five yards and the first down and Maualuga was on the opposite side of the play.

That's not to say Maualuga was awful. He wasn't. You don't generate 13 tackles without making at least one good play. With 11:30 remaining in the third quarter, Maualuga instinctively shifted and fought through Logan Paulsen's block during Alfred Morris' run around the left edge. Granted it picked up six yards, but the lack of contain from outside linebackers and defensive ends were far more prominent.

But if Maualuga is anything, elite is not a word that would describe him. In fact a more accurate description should be job security. Or lack thereof. For any number of good plays that he's made this year, an exponential number more are frustrating to the point of generating serious liability issues. Perhaps it's the combination of an injured knee during a contract year making him a little protective of his body.

For instance with 10:58 remaining from Cincinnati's 14-yard line, Maualuga just stands there while Griffin fakes the handoff before taking off down the left sidelines.

By the time Maualuga makes his move to track Griffin down, he trips over a Tyler Polumbus block on Vontaze Burfict.

Yet we feel obligated to make something else abundantly clear. If it were just Maualuga struggling, this defense wouldn't be one of the worst defenses in the NFL, in regards to yards allowed with a worst-than-average scoring defense. It takes a team effort to be bad. It takes Michael Johnson to break contain, going after the running back on the fake during an option. It takes Burfict biting so hard on a fake, that the offensive tackle's job becomes significantly easier when all he needs to do is fall on all fours and roadblock not one, but two linebackers out of the play.

While people want this witch hunt to be squarely on Maualuga, and justifiably so, it's an entire defensive effort that's embarrassing Mike Zimmer's once proud defense.

With 10:29 remaining in the third quarter from the Bengals seven-yard line, Griffin hands off to Alfred Morris. Robert Geathers tries tackling the running back high, but Morris spins away. Maualuga and Burfict fail to shed their blocks and Reggie Nelson, who I personally view as overrated, simply misses the tackle at the goalline without the distraction of a blocker. The Redskins tighten the game with the Bengals still leading 24-17. 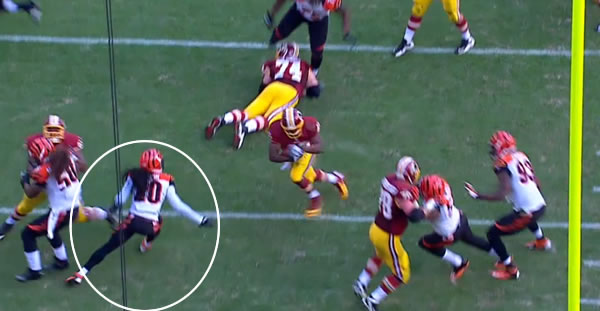 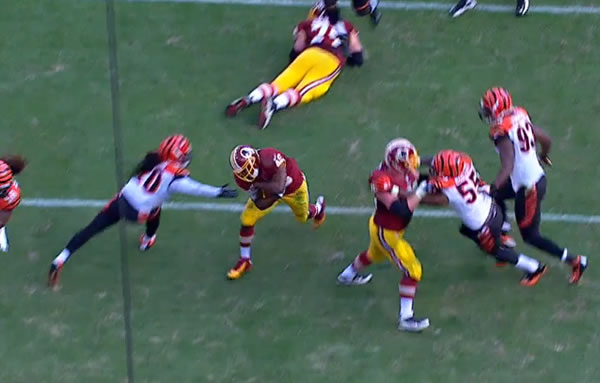 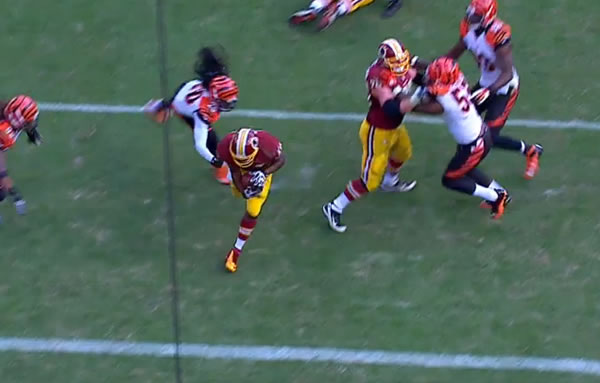 With 8:14 remaining in the third quarter, the Redskins have first down at their own 37-yard line. Griffin hands off to Morris up the middle. Maualuga steps into the point of attack, but is swallowed alive by a mass of bodies. In truth the entire Washington Redskins offensive line destroyed the Bengals front seven, at least three yards off the line of scrimmage. 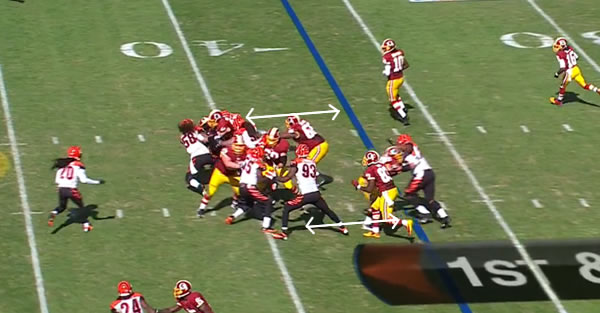 Morris ran through attempted tackles, including Maualuga (can you find him?) for a 13-yard gain.

On the following play Brandon Banks took a pitch left after Griffin faked the handoff to Morris. Everyone bit on the fake and Banks sprints down the left sidelines for a 21-yard gain.

With 5:54 remaining in the third, the Redskins need seven yards to reach the Bengals 19-yard line to convert the third down. Griffin fakes the handoff to Royster and runs down the line of scrimmage with Brandon Banks in tow. Michael Johnson unfortunately collapsed with the run, which put Cincinnati at a significant disadvantage against the option. If Johnson threatens Griffin, it forces the quarterback to pitch where an unblocked Nate Clements is assigned the pitch-man.

Instead Clements didn't know what to do. And who can blame him. If he hits the quarterback, then Griffin pitches it to Banks, which could result with a huge gain. If Clements covers Banks, then Griffin holds onto it with the hope from Clements that someone inside takes care of Griffin.

But really. Look at Clements predicament. 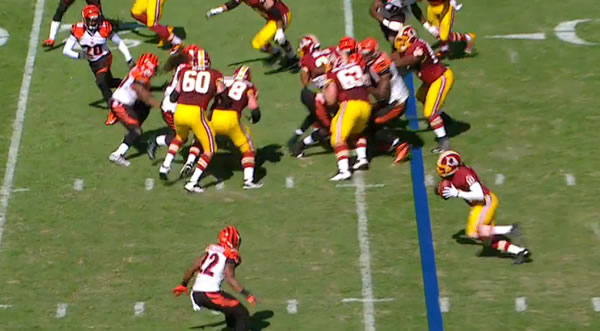 Yea. There's no one coming form the inside. Eventually Reggie Nelson forces Griffin to slide, taking the nine-yard gain but converting the first down. Eventually the Redskins would score on the possession.

We're not sure what will happen with this defense right now. We do know that the 2012 Cincinnati Bengals won't be in the 2012 postseason at this rate.