Cincy Jungle has undergone a significant change but that doesn't change the news cycle and our goal to provide information to you.

So after waking up this morning, piling coffee grains into the coffee maker and taking my morning shower, my zombosis condition was shocked into reality after placing myself at my station. Ohmygod, this is all different! No, no. Just kidding. For the past week we've been burning the midnight oil putting the final touches on our new website while rolling out the same level of content that you've grown accustomed to over the years. Working on serious sleep deprevation with a blood coffee content of 20.0, we've worked it to say the least.

That being said, let me formally introduce you to the completely redesigned Cincy Jungle, developed in part as a united effort across all SB Nation websites. Now you're obviously thinking to yourselves, "everything is going to change. This is disaster." Let me assure you, it won't be. There are many innovative tools at our disposal that will ultimately benefit you, our readers, the people that inspire us to keep up the high-volume content that's both relevant and informative. When it's all said and done, you will still see our ugly mugs (United didn't have the programming power to change that) and the content we provide you every day. Your same friends and online buddies are still here and everything else is essentially the same.

Think of it in terms of the Bengals. Yesterday was the '09 era Bengals with Carson Palmer, Cedric Benson and Chad Johnson. Today it's the Andy Dalton, A.J. Green, Andrew Hawkins and Rey Maualuga BenJarvus Green-Ellis era Bengals. You might be hesitant with change, but look at it this way. Instead of driving an '05 Ford Taurus to your favorite Cincinnati Bengals website, we're revving up a 2013 Ford Mustang and winking at all the ladies (who admire our reaction to a midlife crisis). 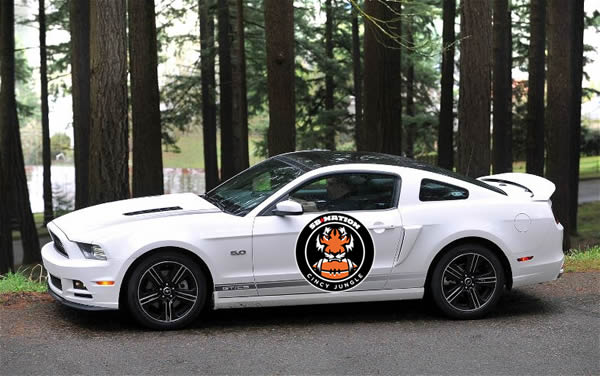 So check the place out, fumble around and put on your Lewis and Clark hat for a little while.

+ WIN TWO TICKETS TO NEXT BENGALS HOME GAME: At some point on Tuesday (today) we're going to be running another "Who Am I" contest with the winner taking home two tickets to the next Cincinnati Bengals home game. We're planning a 6PM kickoff for the contest, so stay tuned to our twitter feed for further updates -- a place we generally throw information regarding the site or Bengals players that sometimes doesn't make it here.

+ NEXT WEEK'S OPPONENT: If you're looking to get a head start for next week's opponent, the SB Nation site is Big Cat Country and you can give them a follow @BigCatCountry.

And as of right now, I'm not seeing a major issue from defensive ends Andre Branch and Jeremy Mincey, neither of whom have generated a quarterback sack this season. It also appears that BenJarvus Green-Ellis and the Cincinnati Bengals rushing offense might have a little catnip this weekend against a defense allowed 154.3 yards rushing per game.

+ Customary every Monday, we take a few plays or storylines and review them, break them down and, if for anyting, make sense of it all. We ran stories about players achieving a few milestones, such as Armon Binns' first touchdown and Orson Charles' first career reception, as well as what we believed to be a designed pass protection flaw that led to a pick-six. And the league's response to multiple officiating errors in the final minute of the game.

+ During our defensive review from Sunday's game, we weren't meaning to single-out Rey Maualuga as we were to promote the idea that Cincinnati's defense has played poorly across the board. Even the pass rush struggled prior to the Washington Redskins game, despite generating five quarterback sacks. Yet of all the defensive prospects, it was their ability to get to Robert Griffin III that really stepped up. Including a career performance by Michael Johnson.

+ Taking a look at the rest of the AFC North performed. [HINT: Bengals are still in first place]

+ Bengals players send out tweets following the win on Sunday.

+ Head coach Mike Mularkey told reporters on Monday that linebacker Daryl Smith, who missed the preseason and the first three games this season, isn't likely playing against the Cincinnati Bengals this weekend.

+ During the same press conference, Mularkey said that rookie wide receiver Justin Blackmon is "pressing a little bit. He's getting a little frustrated that he'd like to be more productive."